Madeira Cake (with a glass of Madeira) 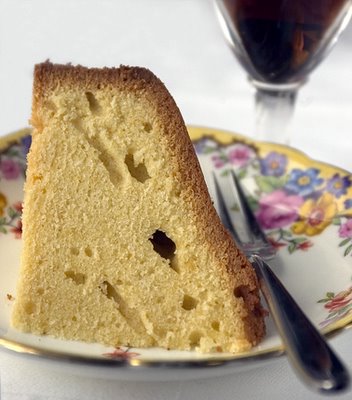 A slice of wine and a glass of cake. No, that's not quite right. A slice of cake and a glass of wine. What's not to like about that combination? You can tell I am already excited at the prospect, and I am not sure which I am looking forward to most. I bought a bottle of Malmsey (sweet Madeira wine) a couple of weeks ago, following a visit to Vinopolis, the wine museum near to the delights of Borough Market, London. I love Madeira, as well as sweet dessert wine (Tokaji - mmmm), and a good glass of Port. The best of them are rich with sugared fruit and spice flavours, and are like drinking a distillation of the most delicious Christmas cakes and mince pies that you have ever tasted. Malmsey is really an after-dinner drink - apparently Verdelho Madeira (medium-dry) is really the one to drink with cake - but I am sure that on this occasion it will do nicely. 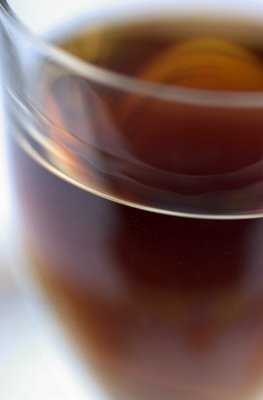 So the purchase of a bottle of Blandy's Alvada 5 Year Old Rich Madeira was the inspiration for this posting. Madeira cake is not exported from the island of Madeira along with the drink, but is a butter and egg rich sponge cake, flavoured with lemon zest, supposed to be very well suited to eating alongside a glass of the aforementioned. Madeira cakes of this type date from the nineteenth century, and are eaten throughout Britain. Madeira wine has been imported into the country from at least the 1600s (legend has it that the Duke of Clarence - brother to Richard III - was drowned in a vat of Malmsey at the Tower of London in 1478).

The combination of wine with cake was first partaken of by genteel persons (mainly ladies) during the eighteenth century. The upper classes rose from their beds well after day break and had their first meal of the day (breakfast) fairly late in the morning or perhaps even after noon. Dinner (the main meal of the day) was taken early to mid-evening, and then a light supper might be enjoyed before bed-time. This meant that there was potentially quite a spell between breakfast and dinner, long enough to make me feel light-headed at the very thought of it. In order to keep the wealthy and delicate from keeling over, an additional light meal was eaten by some (and I'm sure that you could have counted me in on it). This new meal was called luncheon or lunch. The working classes had eaten a meal to serve a similar purpose from the Middle Ages onwards, but their snack was along the line of bread with ale. Georgian ladies would have instead eaten dainty cakes or sandwiches, and drunk either wine or tea. Moving into the nineteenth century lunch became established as a meal with its own time slot at mid-day, and the food eaten was more substantial, although the evening dinner was still the main meal of the day. The cake and wine/tea combination became a snack offered to and shared with visitors, whether they called mid-morning or mid-afternoon. A great incentive to visit your relatives or neighbours!

1. Preheat oven to 180C/350F/gas mark 4.
2. Grease and line a cake tin (20cm/8inch).
3. Cream the butter and sugar together until mixture is light and fluffy, and your arm is heavy and weak.
4. Sift the flour and the baking powder in a bowl.
5. Beat the eggs into the butter and sugar, adding each separately with a little flour to stop the mixture splitting.
6. Stir in the rest of the flour and the grated lemon rind.
7. Put the mixture into the prepared tin, and bake for between 1 1/2 hours and 2 hours. After 1 hour place the two pieces of lemon or citron peel on top of the cake, and continue baking.

NB. I found that my cake was ready not long after an hour had passed, and it ended up a little too browned. Keep an eye on the performance of your own oven. The surface of my cake was cracked, and the application of decorative peel simply looked as if I was trying to distract the eye from the error, so I removed it. 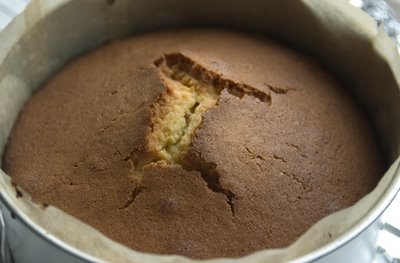 According to the Good Housekeeping Cookery Book, if a cake has a peaked, cracked top it is a sign that either the oven was too hot; the cake was too high up in the oven; or the mixture may have been too dry or the tin too small. My suspicions lie with the oven as I have noticed my cakes tend to brown before they have finished cooking. Next time I make a cake I shall try the lowest shelf rather than the middle one.

Unfortunately after removing the cake from the tin, I discovered that the surface browning also extended to the sides and underneath of the cake. The Good Housekeeping Cookery Book had a recipe for Madeira cake which baked at the same temperature as Jane Grigson's, but the recipe recommended a baking time of 1 hour, rather than up to 2. I think my cake ended up on the overcooked side. For the photo I did trim a little off the base of the cake, and I suppose it doesn't look TOO bad. The sponge was a bit dry, and rather dull. The slice was best eaten from the inside out, and the 'crust' left at the side of the plate. The glass of Madeira was sorely needed to boost proceedings. If the cake were to be moister, and there was more of a hint of the lemon zest to the flavouring, then I think this cake could be quite nice. I can see how it provides a foil to the in-your-face sweetness of the Madeira wine. In the meantime I will pour myself another glass and have a think about what I can do with the rest of the cake... 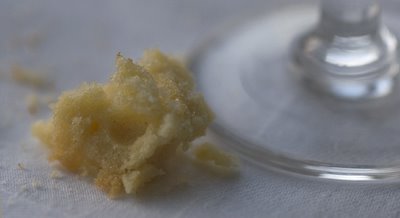 I think madiera cake must be like pound cake in the US. I tried to explain it to a bakery staff person at Waitrose, and she tried to sell me ladyfingers.

I like lemon curd with pound cake, with a few fresh strawberries on the side. Now I'll just look for Madiera cake.

I think madeira cake IS very similar to pound cake. Lemon curd and strawberries - that sounds like a delicious combination, and one that would have worked perfectly to jazz up my cake.

Hello said...
This comment has been removed by the author.
5:28 am

Hi, I've made Madeira cake recently and my understanding is that it's supposed to crack in the middle (hence often baked in a loaf tin, so it looks nicer), and it's also supposed to be brown around teh edges. Yours does look a little dry though. maybe try a slightly differenet recipe? The one I used had less flour. Good luck!

I like lemon curd with pound cake, with a few fresh strawberries on the side. Now I'll just look for Madiera cake.

Looking for some inspiration for your next trip? Find great vacation ideas and inspiration from Things to do with the source for the web ‘s best reviews to travel.