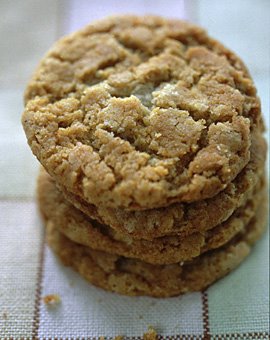 Cornwall has quite a list of intriguing sounding foodstuffs:

Licky Pasty (leek pasty)
Star Gazy Pie (pie made with herring, mackerel or pilchards)
Figgy 'Obbin (suet pudding with raisins - figs are the Cornish name for raisins)
Heavy Cake (a pastry-lie cake with dried fruit)
Mahogany (a mixture of black treacle and gin! Drunk by sailors to put hairs on their chests - I expect)

Cornish Fairings I had made (& enjoyed) in the past, but I had never considered the meaning of their name. A 'fairing' is basically any item bought as a gift at a fair. This could be an edible item or a more lasting memento.

Every old town or country fair in England had a different food associated with it, often a type of gingerbread, a long-lasting heritage deriving from the Medieval love of spices. In Hampshire you could buy a Gingerbread Husband. These little fellows were pressed into a wooden mould to form their shape, and then gilded. If I can ever find a Gingerbread Husband mould I will be making up a whole batch of husbands (at least you can eat them if they get tiresome). Bath Fair sold Gingerbread Valentines (perhaps to give to your Gingerbread Husband).

Cornish Fairings are also a spiced biscuit. They have a success beyond their fleeting appearance at the local fair, and have been produced commercially for over a hundred years by a firm called Furniss based in Truro (established in 1886).* Click here for a related story for cat lovers.

I have always had a romantic view of these traditional fairs - seeing them in a Thomas Hardy-esque light. Many British fairs that still make an annual appearance are the great-great-great etc. grandchildren of Medieval fairs. Their ancient relations were either Charter or Hiring Fairs.

Charter Fairs were a venue for the sale of horses, cattle and other livestock. The name comes from the fact that these fairs were licensed by a grant or charter from the monarch. The local landowner or parish council held the charter that was a source of income for the king. Fairs were usually held on a Saint's day or feast day, so they became not only a chance to sell your cow, but to meet up with old friends and have a bit of a jolly.

Hiring Fairs originated for more sober reasons. In the mid 14th century a terrible plague ravaged Britain (The Black Death) and killed many thousands (and quite possibly 2 million people in total), which meant that any healthy, fit individuals able to still carry out manual labour could expect to command a premium wage. Therefore in 1351 was introduced a Statue of Labourers Act, which set a limit on the days that workers could be hired, and also tried to enforce wages to return to pre-plague levels. Statute (Hiring) Fairs were held quarterly with the intention of stabilising the labour market.

The annual fair in the Gloucestershire town of Tewkesbury, near to where I grew up, is the descendent of a Medieval Hiring Fair. Round those parts, and across the Midlands, such fairs were often known as Mop Fairs due to the fact that women wishing to be hired would bring a tool to hold to symbolise their trade. The Mop Fair in Tewkesbury is still held on or near-to, the same dates each year, the 9th and 10th of October - dates which link it also to the celebration of Old Michaelmas Day.

But enough history, and on with the baking. My recipe for Cornish Fairings comes from Linda Collister's 'Baking Bible'. The recipe is very straightforward, and the only step I didn't follow was to add in mixed peel (didn't have any to hand, and I don't think it is an essential ingredient, as none of the other recipes I read used it). Linda attributes the cracked surface of the biscuits to the combination of baking powder and bicarbonate of soda - more on this later.


1. Preheat oven to 200C/400F/Gas 6. Prepare a couple of baking sheets.
2. Sift the flour, salt, baking powder, bicarbonate of soda, ginger and mixed spice into a larger bowl.
3. Stir in the sugar.
4. Add the diced butter and rub in until the mixture resembles fine breadcrumbs.
5. Stir in the mixed peel, and then the syrup.
6. Using your hands, roll the dough into about 20 marble-sized balls (I found mine were quite large 'marbles' ). Space them well apart on the baking sheets.
7. Bake in oven for about 7 minutes or until golden.

I watched my marble balls slowly sink down onto the baking sheet, as if descending into a curtsy, before completely prostrating themselves before my gaze. Perhaps my little dough discs grew shy or obstinate, for they remained resolutely of a piece and crack-free. 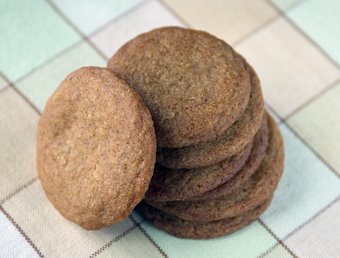 I double-checked the 'use-by' dates on my raising agents - well within. Both my baking powder and bicarbonate of soda were stored in dry conditions, and the baking instructions followed as I had followed them before. Mysterious. Not that this lack of cracking effected the flavour, but the texture of the biscuits was distinctly more chewy and less snappy then earlier batches. So, it is at this point I have to confess that I remembered I had photographed an earlier set of Cornish Fairings that I had made, and I thought that I would insert the images into this posting so that you can see that the 'ones that I made earlier' are how the biscuits are supposed to look. 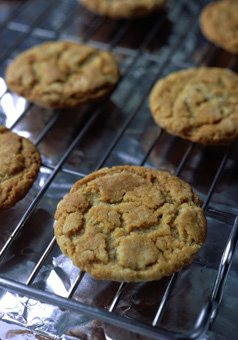 Perhaps someone out there knows the answer? All suggestions received with great interest. One other recipe I read suggested that you SLAM the baking tray down on a worktop after taking the biscuits from the oven. Not sure that that would have made a difference. Another recipe suggested moving the biscuits from a top to a bottom shelf during the course of the baking time. However, previously I have followed Linda's recipe without any problems. She does mention as a tip warming the syrup in cold weather - which I didn't do - so maybe this had a bearing? 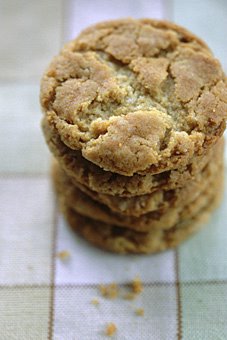 In the meantime, I found that the biscuits went down well with a cup of tea, and even better broken up and strewn over a bowl of Cornish Clotted Cream icecream. It is nice to know that in the world of baking there is rarely any wastage.
Posted by AnnaW at 4:53 pm 50 comments: