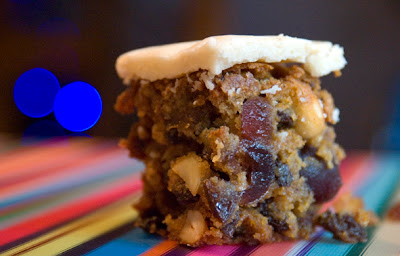 This year I wanted to bake a Christmas cake - my first. I have made Christmas puddings and mince pies aplenty, but despite having polished off many a slice of Christmas cake I have never created my own. I love Christmas cake, love fruit cakes dense with fruit, nuts, peel, spices, and whatever other treasures can be packed in. I love the marzipan layer, and generally I like the royal icing on top (although sometimes this is too hard or too sweet). Lots of people don't seem too bothered about this element of Christmas food, some positively dislike rich fruit cakes of this type, and some (nutters) don't even like marzipan. Well, Christmas is a time of giving, and this year I wanted to give myself a lovely cake. Maybe I could also share a little of it if I felt the spirit of Christmas strongly enough.

I had a suspicion that the British Christmas cakes that enthusiasts such as myself tuck into, are not all that ancient as a tradition of the season. From my research I learnt that the oldest cake associated with the British Christmas period is the Twelfth cake (King cake or Bean cake). Many other countries have their take on this - such as France's La Couronne (or Galette) des Rois, Mexico's La Rosca de Reyes, Switzerland's Dreikönigskuchen or the Gateau des Rois of New Orleans. Twelfth cake was served on the Twelfth Day/Night of Christmas (Epiphany - the twelfth night after Christmas, a Christian holy day commemorating the visit by the Three Wise Men to the Christ child), and was a spiced fruit cake - originally a yeast-raised fruit bread or a light cake made from breadcrumbs, but by the 19th century had become more densely packed with fruit, heavier, and closer in consistency to the traditional Christmas Plum Pudding (which has a much older pedigree). Twelfth cake contained tokens (a dried bean for the King and a dried pea for the Queen) that would determine who had a one-night stand as a monarch, and those elevated could expect other party-goers to act out their every whim. The Twelfth Night feast was known also as the feast of fools, where misrule reigned and the lowest ruled over the highest, servants took precedence over their masters and chaos was celebrated. The feast itself predates Christianity and has links to the Roman feast of Saturnalia. The Puritans banned Twelfth Night activities, but with the Restoration the custom was also restored and the partying continued until late into the 19th century. In 1870 the revels came to Queen Victoria's attention and she deemed that they were irreligious and irreverent. She deleted the feast from the British calendar of feast days and festivals. But that, my friends, was not quite that. Victorian bakers, not wishing to miss out on the sale of the cakes that they produced for Twelfth Night, simply offered the same cakes for sale at an earlier date and rebranded them as Christmas cakes. According to the food historian, Bridget Ann Henisch, by the 1830s the bean and pea were no longer hidden within the cake, but instead were illustrated cards, slips of paper or ceramic figures, drawn from a hat or bag. Henisch suggests that by 1870 public enthusiasm for Twelfth Night had waned, and Christmas Eve and Day had become the focus of what had become a shorter (thanks to the Industrial Revolution) holiday period. Twelfth cakes were sometimes decorated with raised sugar figures or lattice designs, and these decorative elements continue in the use of marzipan, icing, and the odd rogue (although, some might say, obligatory) element of tastelessness on the top of Christmas cakes.

There is no single recipe for Christmas cake, and I imagine it is probably a recipe which most people feel free to adapt to suit what they like (less peel, more booze, no glace cherries, extra stem ginger etc.). It is not a recipe to be precious with, it is a generous cake both in terms of its content and its spirit. I have decided to take this notion and run with it, as the recipe I am going to bake comes from beyond the shores of Britain, I am also drawing upon the Victorian connection and my recipe comes from one of the countries that the Victorians couldn't help themselves but meddle with. That country was known by the Brits as Ceylon, and is now called Sri Lanka. The Sri Lankan Christmas cake is a local variation of what would have appeared on Victorian Christmas tables back home. The Sri Lankan cake is made with semolina, dried fruits, chow chow, cashew nuts, almonds, spices, rosewater, honey, brandy, butter and eggs. It is topped with a marzipan made from cashew nuts, icing-free, and is generally served cut into squares. Some of the ingredients betray the influence also of Portuguese and Dutch tastes, two other European countries that passed through.

My recipe comes from 'Cakes From Around the World'. I roughly halved the ingredients given as I only wanted to make one cake. This recipe omits the chow chow - probably because it is not an easy ingredient to find here. To see a recipe that includes it, click here.

Quantities given below will produce two 20 cm/8 inch square cakes.

For the cashew nut marzipan:

1. In one large bowl put the peel, fruits, nuts, brandy, rosewater, honey, vanilla extract and spices. Give a good old stir up with a metal spoon, then cover and leave overnight for some flavour mingling.
2. Line two 20 cm/8 inch square cake tines with greaseproof paper, and preheat oven to 150C/300F/Gas 2.
3. Using a hand mixer, unless you have wonderfully strong wrists, cream the sugar and softened butter until light and fluffy. On a slow speed, add the semolina and egg yolks a little at a time to avoid curdling. Take a metal spoon and stir in the fruit mixture until blended.
4. Take the 6 egg whites and whisk until they stand in peaks, then using a metal spoon stir the egg whites gently into the cake mixture.
5. Divide the cake mixture between the two cake tins and bake until a skewer inserted in the centre comes out cleanly - about 1 hour and 45 minutes. Leave the cakes to cool in their tins, then wrap in foil and set aside for 3 or 4 days to mature (you can feed with brandy during this time).
6. To make the marzipan put the nuts into a food processor and whizz until finely chopped. Add the icing sugar and other ingredients, processing at the lowest speed until the mixture comes together into a ball (my mixture seemed quite wet so I used extra icing sugar to help dry the marzipan). Dust your work surface with icing sugar and roll out the paste - you want to create a sheet large enough to cover only the top of each cake (roll into rough shapes and trim). 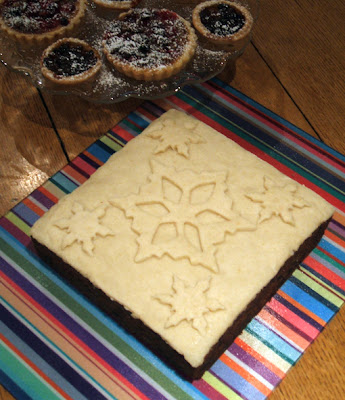 I decorated the top of the cake with snowflakes cut from marzipan - which looked quite tasteful and therefore my fingers felt itchy for a bit of tinsel to strew around. It was served for Christmas tea, that meal not eaten for reasons of sustenance or nutrition, but somehow necessary a few hours after the consumption of the largest lunch of the year. Several of us managed to enjoy a small piece, and found although it was bursting to the seams with fruit and nuts it was lighter than many Christmas cakes. Despite the fruitfulness of the slice, the spices were still evident, and this helped to evoke warmer climes and banished Hertfordshire drizzle. The marizpan also benefited from the extra flavourings of brandy, rosewater, almond and vanilla extract it contained, it was sweet but it didn't have the single dominating flavour that almond marzipan. If you aren't keen on marzipan usually, then I do recommend that you give this one a go - and the cake too!