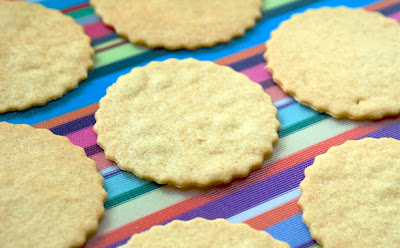 The family bakery of Alfred Romary was responsible for the wafer biscuit exported from the Kent spa town of Tunbridge Wells (Royal Tunbridge Wells, if you please) and sent out to Macy’s of New York, food stores in Belgium and Paris, and up to London for sale in Harrods, Fortnum & Mason, Morel Bros. Cobbett & Son Ltd., and Jacksons of Piccadilly - all purveyors of fine foods. Queen Victoria visited Alfred’s shop just before Christmas 1876, and liked the wafers so much that she granted the company a Warrant of Appointment to Her Majesty, and subsequent monarchs continued the custom - high praise indeed. Framed letters proudly displayed on the shop walls were orders for biscuits from the Queens of Yugoslavia, Spain and Romania. Tunbridge Wells Wafers were clearly enjoyed by discerning women of grand quality – do all Queens like a biscuit with a cup of tea?

Alfred Romary set up in business in 1862 at 26 Church Road, Tunbridge Wells. Initially he was classified as a ‘Water cake maker’, but it was his wafers that made his name famous around the globe. In 1926 A. Romary & Co. became a limited company when W. A. P. Lane bought it. According to Dorothy Hartley in ‘Good Things in England’ the company was sold onto Freeman’s Norwich Hollow Biscuits prior to 1932, the year her book was published. I could find no corroboration of this in the other material I read, but Romary’s did at some stage start making and selling Freeman’s Norwich Hollow biscuits (a type of rusk). In 1935 Rowntree purchased the company and built a new factory in Tunbridge Wells, although some baking continued to be carried out at Romary’s bakery in Church Road. Rowntree stopped making the Tunbridge Wells Wafers locally in 1957, a result of wartime and post-war rationing. However, in 1963 production restarted at Rowntree’s factory in Glasgow (because the Queen liked the biscuits, apparently), and continued until 1981. A final batch of biscuits was made for the wedding of Prince Charles and Lady Diana Spencer. Rowntree was acquired by Nestle in 1988, so the Tunbridge Wells Wafers original recipe must lie deep in the archives of this Goliath.

What made Tunbridge Wells Wafers so good that they met with royal approval? (Maybe Duchy Originals should pick up the baton and manufacture them now.) Romary’s themselves described the biscuits in a trade advertisement: ‘As thin as lace, of a flavour so delicate as to be indefinable. The clubs serve them with port, but they are also excellent with ices or at afternoon tea. Many people prefer them to sweets and chocolate. In two flavours, Sweet and Ginger.’ ‘Good Things in England’ (1932) says of Romary’s Tunbridge Wells Wafers: ‘There are Ginger wafers, Royal wafers, water biscuits, Old English stone-ground wheaten wafer biscuits, etc., all unique and delicate eating, quite different from the ordinary biscuits however good; and distinctively English.’ Mary Ann Pike writing in ‘Town & Country, Fare & Fable’ (1978) states; ‘The wafers are about 3 inches in diameter, very delicate and lacy, and are good with cheese as well as wine.’

Wafer biscuits can be cooked by heating the raw mixture between two metal plates (think thin waffles), but Romary’s cooked their biscuits on metal trays in ovens. The paste was rolled to wafer thinness by hand, and continued to be so even after Rowntree introduced mechanisation. A spiked roller was used to make the perforations so the biscuits could be made rapidly, and quickly sent to the oven for baking. The booklet I obtained from Tunbridge Wells Museum and Art Gallery says that ‘trap ovens’ were used. Does anyone know what a trap oven is?

Although Romary’s Tunbridge Wells Wafers were a proprietary recipe, I found on my bookshelves not one, but two possible recipes for the biscuits (and thereby proving the point that, yes, I did need to buy that book). The first is a recipe titled ‘Tunbridge Wells Cakes’, in Dorothy Gladys Spicer’s collection ‘From an English Oven’ (1948). However on closer examination her recipe is for a shortbread type biscuit flavoured with caraway seeds. It looked as if it would produce a biscuit similar to the Shrewsbury Cakes I have recently posted about, and I was pretty certain that this is not what Romary’s famous wafers would have been like. I subsequently came across another recipe for Tunbridge [Wells] Cakes on the internet - this on a site relating to the era of Jane Austen (see no. 29) - the recipe (sourced from one of two cookbooks written between 1749 and 1796) is identical to the one in ‘From an English Oven’, and predates Romary’s Tunbridge Wells Wafers by 100 years. It would be interesting to learn more about this older biscuit – perhaps they were enjoyed by genteel Regency visitors attending the Spa?

The second recipe looked closer to the mark, as this was quite different in terms of method and ingredients and I reckoned it would produce a biscuit not too far removed from the brandy snap - so definitely a contender for the description ‘delicate and lacey’. This latter recipe is in Section IV (‘Cereals’) of Andre Simon’s ‘Concise Encyclopedia of Gastronomy’ (published by The Wine and Food Society in 1945), the recipe is ascribed to Doris Lytton Toye, who wrote for Vogue magazine at that time. I decided to go with this recipe, but I would love to hear from anyone with an ‘authentic’ recipe. I baked once, and then had to refine the recipe and instructions as my first batch of biscuits was not a happy one. Ingredients and method are my revised versions:

150g plain flour
1 teaspoon ground ginger
1/2 teaspoon baking powder
55g treacle (I had to decide whether this meant black treacle or golden syrup, as the term ‘treacle’ has in the past been used for both substances. I went with golden syrup as I felt that black treacle biscuits would be more of an acquired taste and golden syrup more of a crowd-pleaser, but please feel freee to try black treacle if that tickles your tastebuds.)
55g butter
55g caster sugar or soft brown sugar

1. Preheat oven to 150C/300F/Gas 2 (D. L. T. suggests cooking in a ‘very moderate oven’, so this is my approximation of that instruction – we have a fan oven).
2. Prepare two baking sheets by lining with greaseproof paper.
3. In a medium sized saucepan melt the butter, treacle and sugar. Don’t allow the mixture to become too hot - as soon as the ingredients have blended remove from the heat.
4. Sift the flour, baking powder and ginger into a bowl. Gradually add the dry ingredients to the warmed mixture, stirring to combine after every spoonful and mix to a paste. D. L. T. recommends that it is easier to handle the paste if it is used while still warm.
5. Divide into three portions. On a floured surface roll out each portion as thinly as you can. I found that the best way to work was to roll the dough out directly onto the baking sheet, use my 3 inch metal cutter to mark out the biscuits, and then to remove the surplus dough. This meant that I didn't have to try and move very thin pieces of dough.
6. Bake for about 10 minutes.
7. Allow to cool for a few minutes only, before transferring to a wire rack.

Doris Lytton Toye states that wafers are the ‘thinnest and lightest of biscuits’, but I have to tell you that initially this recipe produced a biscuit with neither of these qualities. The liquid and the dry elements of the dough did not marry well, the mixture appeared too dry and was impossible to form into a smooth paste. 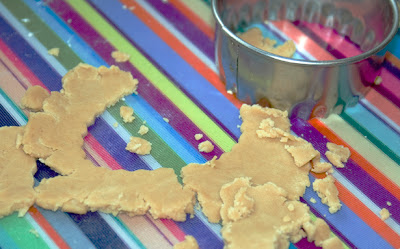 I decided to add a little milk to bind the dough, which helped, but I struggled to roll the dough out as the mix continued to crumble apart. In the end I managed to use my rolling pin to both compress and roll enough of the dough to form a dozen biscuits, but there was no way of rolling to wafer thinness. The resulting ‘wafer’ was crisp to the point of hard, and although the flavour was not bad, it couldn’t make up for the tooth-snapping texture. 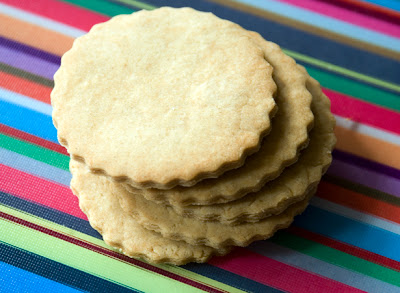 Compared to the brandy snap recipe I previously cooked (successfully), that uses a similar method of melting together sugar, syrup and butter, the proportion of flour seemed very high. Was the recipe in error, or was there a flaw in my technique? I had a look at a few brandy snap recipes, and I noticed that they instructed that you add the dry ingredients to the wet, whereas the recipe in 'Cereals' the contrary was the case. By working a spoonful of flour at a time into the warmed butter, treacle and sugar mixture I was able to form a smooth paste, and stop adding flour once the correct consistency had been acheived - this meant I had about 25g of flour left over - the 150g in the ingredient list above is my adjusted amount. 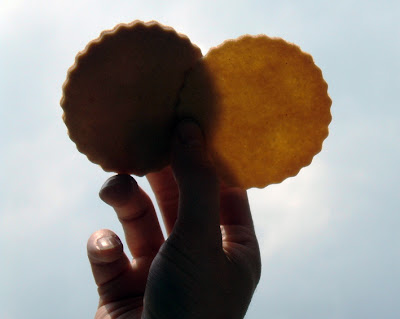 My adjusted recipe produced a far lighter biscuit, which still had a degree of rigidity, but in a thinner biscuit this translated into 'snap', or a delicate brittleness. The biscuits had a good tangy gingeryness. Look at how the light travels through my second wafer, compared to the sunlight neutralising first version. Now which do you think her majesty would prefer - and which would go to the corgis? 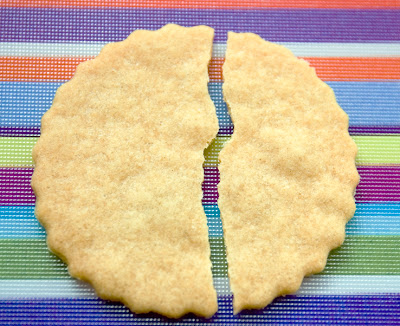 With thanks to Ian Beavis at Tunbridge Well’s Museum and Art Gallery, Karen Tayler at Tunbridge Wells Library, and ‘Anke’ at www.anke.blogs.com, all of who helped with information. Tunbridge Wells Museum sell a booklet entitled ‘Tunbridge Wells Biscuits – The Story of Romary’s’ – yours for £2.25 – please contact the museum to purchase a copy.
Posted by AnnaW at 1:26 pm 30 comments: