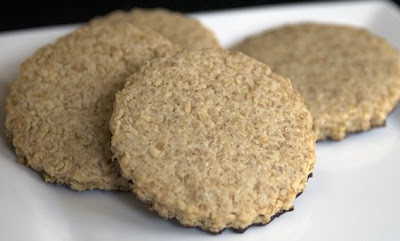 Digestive biscuits are one of our most popular commercially-baked biscuit varieties - the chocolate-coated version gets wolfed down in the UK at a rate of 52 biscuits a second, according to the website of United Biscuits, one of the major producers. Don’t look at me. I can probably only manage that level over the course of a full minute.

According to United Biscuits’ website; ‘The first ever digestive biscuit was created by a new young employee, Alexander Grant [in 1892 according to a United Biscuit’s Press Release, but this site, dates the biscuit to 1839]. The name Digestive was derived from its high content of baking soda as an aid to food digestion.’ This idea that baking soda aided digestion is contemporary with creation of the biscuit, and manufacturers no longer make any such claim.

As an aside, Mrs Beeton writing in 1861 says of biscuits; ‘Biscuits belong to the class of unfermented bread, and are, perhaps, the most wholesome of that class. In cases where fermented bread does not agree with the human stomach, they may be recommended: in many instances they are considered lighter, and less liable to create acidity and flatulence.’ No wonder we are such a nation of biscuit eaters (without flatulence... possibly).

A competing claim for the first digestive comes from another Edinburgh biscuit manufacturer. Robert Middlemass set up Middlemass’ Biscuit Factory in 1835. By 1896 production was mechanised and Middlemass produced the famous ‘Albert Biscuit’ during Queen Victoria’s reign (click here for a recipe) but the achievement he was proudest of was the ‘invention’of the digestive biscuit [sorry, I couldn’t find a date for this one]. The factory closed in 1974.

The chocolate digestive biscuit was first produced by Mcvitie & Price in 1925. They named it the ‘Homewheat Chocolate Digestive’ because the wheat used in the biscuit was grown in Britain, at a time when competitors were using imported ingredients. It was therefore (and still is) a proudly British biscuit - although perhaps the Scots should really get the lion’s share of the credit for coming up with the idea in the first place. Incidentally, it is only in the last few years that ‘Homewheat’ has been dropped from the packaging of the Mcvitie’s Chocolate Digestive after a rebrand, although a scan around the internet suggests that exported biscuits still carry this name - check out the ‘product features’ for a chocolate digestive on Amazon.com!. Don’t laugh, I think ‘snack’ , ‘teatime’,’easy dessert’ and not to mention ‘made in England’ are very important selling points.

In ‘The Oxford Companion to Food’ (Ed. Alan Davidson), Laura Mason describes the digestive biscuit as being, ‘of the pastry flour type, made from coarse brown flour. It is thick, fairly crisp, but also crumbly and, being only moderately sweet, goes well with hard English cheese. The biscuit has no particularly digestive properties and is banned for sale under that name in the USA. Alternative names are ‘wheatmeal’ and ‘sweetmeal’. Recipes for home-made digestives generally include oatmeal to give the required texture.’

I found various digestive biscuit recipes on my shelves. The earliest is from a book published in 1902 (The Queen Newspaper Cookery book series, No. 11 - Bread, cakes and biscuits, collected and described by S. Beaty-Pownall), reproduced in Andre Simon’s ‘Cereals’ (pub. 1943):

'Rub 1 lb. of butter into 5 lb.of wheatmeal; make a hollow in the centre and pour into this 4 lightly beaten up eggs, with 4 oz. sugar and 1/4 oz. of carbonate of soda; mix this all to a little pool of batter in the centre of the flour, then gradually draw down the latter from the sides with a circular motion of your fingers, moistening the dough this produced with about 1 quart of water, added by degrees, till you get it all to a nice workable consistency. Take up one-third of this dough and roll it out to the thickness of a penny; spread a clean cloth on the kitchen table; lift the dough on to the rolling-pin and roll it out again on the cloth, then cut out into oval or round cakes, prick these and place them in the oven. Finish off the rest of the dough in the same way.'

No baking temperatures or times given.

For cooking up commercial quantities (though not a batch to rival McVitie’s) you could turn to the recipe in ‘The Baker’s Repository of Recipes’, published in the late 1940s, and part of a collection of recipes representing Scotland’s bakery industry prior to 1939:

Rub fat finely through flour and make all into a dough. Allow the dough to rest, then run down through rollers. Cut out, preferably with a combination cutter. Lay on wires and bake. The dough is usually passed through rollers in canvas sheets.

This second recipe uses a combination of different flours and adds fats to the mix. It looks not too far removed from the content of today’s supermarket biscuits, but I fancied baking something a little homelier (and smaller in proportions).

110g/4 oz. medium oatmeal [I used fine oatmeal as that was already in the cupboard. By all means try medium, but I think fine will prevent the biscuit feeling too much like chipboard]
35g/1 1/2 oz. caster sugar
110g/4 oz. wholemeal flour
75g/3 oz. butter
A pinch of salt
A small pinch of bicarbonate of soda
1/2 egg

Rub butter into flour and oatmeal, add sugar, salt and soda. Bind with the beaten egg, put the dough on pastry-board sprinkled with oatmeal, and roll out. Sprinkle lightly with oatmeal, roll it in, and then cut in oval shapes. Bake in a tin in a fairly hot oven.

(N.B. The Reader’s Digest 'Farmhouse Cookery - Recipes from the Country Kitchen', carries an almost identical recipe under the name ‘Digestion Biscuits’. The text state; 'As their name suggests, Digestion Biscuits were considered good for the stomach. Certainly, the Victorians thought so, and the biscuits - made with oatmeal and wholemeal flour - were popular in many country households.

Digestions Biscuits were sometimes eaten as an alternative to bread. They are excellent with butter and cheese.')

It was this second recipe that I used for my biscuits. I used an oven temperature of 190C, and baked for 12-14 minutes. The observant among you will spot that I dipped one face of my biscuits into dark chocolate. Well, I had to really. I did try one or two undressed biscuits, and very nice they were too, but it would have been clear foolishness not to also have tried them with chocolate. 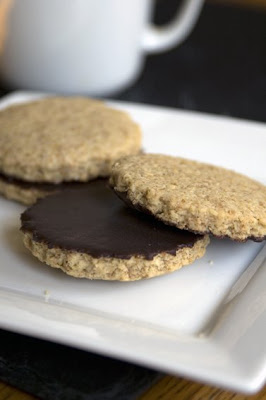 As a point of comparison, I purchased two packs of commercially made digestives. Everyone and their aunt produce their own brand of digestives, so I chose Doves Wholewheat Digestives as Doves make the point of stating on their packaging that the biscuits are ‘Made with English Wheat’; and I selected Nairns Oat Digestives as Nairns are an Edinburgh based Scottish bakery, plus the inclusion of oats made the recipe similar to the one I baked from. 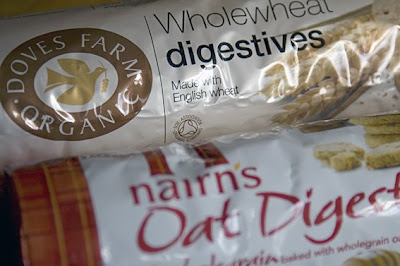 This may have placed them at a disadvantage, but neither of the other two sets of biscuit had any chocolate anywhere about them... 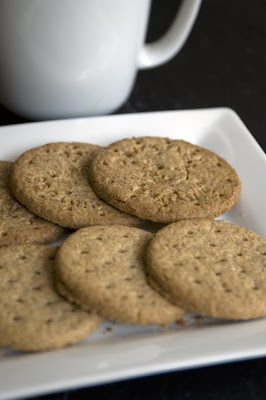 The biscuit tasting was carried out by myself and my junior kitchen hand. In Ellis' honest opinion they were all much of a muchness, and all samples disappeared into his tasting hatch at a fast rate. I tried him with a cheese laden biscuit, but this proved unpopular and was quickly ejected from the tasting hatch. For myself, I found the commercial biscuits dryer and crisper, with a firmer 'bite'. I couldn't discern the flavour of honey in the Nairns biscuit, and found the Doves biscuit was of similar subtle sweetness. Both stood up well to a dunking in a cup of tea (a very traditional method of consumption). My home-baked digestives had an easier texture, more crumble about them and were more interesting in the mouth. I had been concerned that the home-made biscuits would end up a little penitential - obviously, the chocolate coating helped - but they were tasty and far removed from a dry cardboard state. 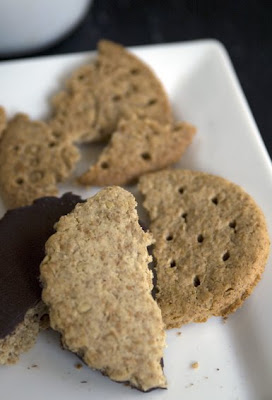