Parkin (or Perkin or Tharf cake) 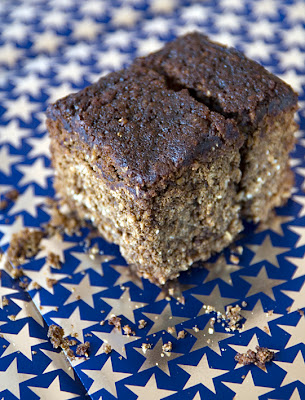 To follow on from my Orkney Broonie baking I have journeyed a few hundred miles south to the north of England, with one foot remaining in southern Scotland. Parkin is an oatmeal gingerbread, usually made with the addition of black treacle, baked in the northernmost counties of England as well as over the border. Recipe variations are numerous and parkin can take the form of either a biscuit or a cake. Yorkshire and Lancashire both have their own favoured recipes (Lancastrian parkin has a larger proportion of oatmeal), and so do smaller communities and individuals (some add candied peel or other dried fruits and I have seen recipes with the inclusion of coriander seeds). The thar, tharf or thor cake also baked in the north of England – the word ‘thor’ is rooted in the Anglo-Saxon 'theorf' or 'tharf' meaning unleavened - is parkin by another name. Theorf/tharf cakes were made of oatmeal and water and cooked on the griddle, the ingredients were enlivened at feast times by the addition of spices and sweetening (originally honey). The southern Scottish and Northumbrian perkin is a griddle-cooked variety of parkin (now more usually tray baked in an oven), and elsewhere early recipes for parkin were similiarly cooked. This web-page has some old recipes if you would like to try making the griddle-cooked thar and parkin cakes. Parkin biscuits are a contemporary incarnation of the griddle-cooked cakes, and ingredients such as golden syrup give a modern flavour.

Historically, each community produced their version of parkin to be consumed as part of local events that took at the end of October or beginning of November. The cake was so intrinsic to the celebration that many of these events took the name of the food. In West Riding the first Sunday in November was known as Parkin Sunday. The 1st of November was known as Cake Night in Ripon and Caking Day in Sheffield. In Lancashire, the Monday after the 31st of October was known as Tharcake Monday. The 1st of November is All Soul's Day, and it was customary to give some form of Soul or Soul Mass Cake to callers (children or the poor of the parish) - in these areas the cakes given out were one of the variations on parkin. Over time the national celebration of deliverance from the gunpowder plotters (1605) has taken precedence over smaller events, and gingerbread cakes, already eaten by many in the North of England and Southern Scotland at this time of year, have become a fixture of November the 5th festivities.

I had many recipes for parkin amongst the books on my bookshelves, but I went with one from Sybil Kapoor’s ‘Simply British’ as I have not baked from this book previously (oh, and also, her recipe requires a whole tin of black treacle. This is the sort of excess that I like...).

1. Preheat the oven to 180C/350F/gas 4. Prepare a 25cm/10 inch cake tin (this needs to be oiled and fully lined with greaseproof paper).
2. Sift the flour and spices into a large bowl. Stir in the oatmeal and the bicarbonate of soda.
3. In a saucepan over a low heat, melt together the treacle, butter, milk and sugar. Stir occasionally until the butter and treacle are melted, and the sugar dissolved. Black alchemy (see below). 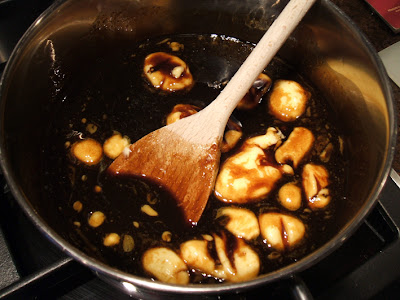 5. Immediately pour the warm and wonderfully dark mixture into the dry ingredients and beat thoroughly. Pour into your prepared tin, spreading mixture to fill tin evenly.
6. Bake in the oven for 45 minutes, or until firm.
7. Leave to cool in tin, then cut into squares. Again this is one of those cakes that need 'resting' before consuming in order for maximum moistness and deliciousness to be attained. In order to do this wrap cake in foil and store in an air-tight box.

I managed to be very obedient and restrained, and I left this cake for almost a week in its foil jacket before cutting a sample square. Although the flavour of the cake was good (with all that treacle it sure should be), the hoped for moistness was sadly lacking. In common with the Holywake Bake cake that I made last November the core of the cake was a little dry, enough to make the consistency cloying. This was disappointing, particularly after the seven day wait for a taste, and I wonder if the problem is down to my recipe, my baking, or perhaps I am expecting these cakes to have a moistness that they just don't have. Does the oatmeal greedily draw in all available dampness, but then refuse to share it round with the other ingredients. Did I treat oatmeal badly in a past life? I love the flavour and texture that oats and oatmeal can bring, but of my three attempts at oatmeal gingerbread, two have been damp squibs rather than fiesty firecrackers. Can anyone provide me with a tried and tested parkin or tharfcake recipe that produces a deliciously moist and flavoursome cake, a sparkler?

I started this post at the beginning of November, and here I am finishing off at the beginning of December. What excuse can I offer? Well, my junior baker is already crawling and keen to move on to the next stage. Looks like he will be heading to the kitchen all by himself very soon. Every morning he puts on his 'active trousers' (in the photo they are just about to go on), and they keep him moving all day long - and me away from the computer, the camera, and the cake tin. 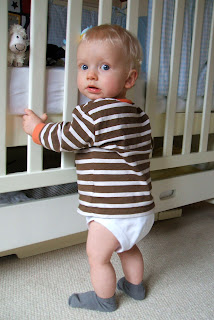