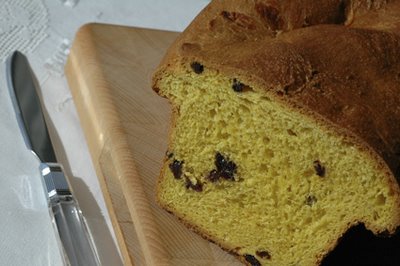 Saffron is an ingredient imbued with an air of exoticism, sensuality and beauty. Its musty perfume and concentrated potency both awaken the senses and astonish - how can such a tiny amount of what looks so meaningless release such colour and scent? The labour intensity of harvesting saffron (each stigma removed by hand, 4,300 flowers to be visited to form an ounce of weight), and thereby the cost of the end product, have also added to its status. Stories of Phoenician sailors landing on the rugged Cornish coast to barter with saffron in exchange for tin, have increased its romantic image.

That all said, saffron is a spice not to everyone's taste. For all those that wax lyrical over it, there are also those that consider it a tad overrated. Of course those less impressed may not have sampled the true flavour of saffron. Because of its cost synthetic substitutes or ground turmeric powder are sometimes used in its stead. In the index of Elizabeth David's 'English Bread and Yeast Cookery' is the item 'Saffron, travesties of'. Turn to the page in question and you will be warned to beware 'false, shameful saffron cakes'; these will be made without saffron, only colouring, too much vanilla and sugar sweetening and are sponge cakes, rather than yeasted breads.' Ms. David goes on to give several recipes for genuine saffron cakes - a recipe originating from Devon; a traditional cake from Cornwall; and also recipes from the 17th and 18th centuries which were baked more widely across the country. Not a hint of an E-number or a whiff of shame to be found in these recipes.

Saffron was originally favoured for the lovely bright yellow colour that it imparted to food. It was used liberally by chefs to wealthy mediaeval households for just this effect. Saffron was imported, but some areas of England were able to cultivate it. The cost of 'local' saffron was little less than imported saffron because of the labour involved in producing it. Cambridgeshire and Essex had saffron farms (so too Stratton in Cornwall according to Linda Collister in 'The Bread Book' and Jane Grigson in "English Food' - although I could find no further information on Cornish grown saffron). Saffron Walden in Essex is named for the local trade, although the saffron grown here was principally used for dyeing wool for weaving. The cultivation of saffron in England had all but died out by the 18th century. Despite its growth on the East side of the country it was only in Devon and Cornwall that saffron became associated with a regional food, and both districts developed their own form of fruit bread flavoured with the spice.

Now, at this stage I have to confess that part of the reason that it has been such a long while since I last posted, is that I had
to have two goes at turning out a decent saffron cake. Try number one used the Cornish Saffron Cake recipe from David's 'English Bread etc.', and frankly my loaf turned out to have all the appeal of a house brick. It was edible, but very disappointing. The rise I achieved with the dough was really minimal, despite my incredible patience with it. Patience sorely tried my loaf (after a taste) went binwards. The saffron I used was clearly past its prime, and the loaf was a muted yellow, rather than a proper sun-has-got-his-hat-on golden. I blame myself for the outcome, but, what to do? Browsing through a recipe book at work I found the answer. In Linda Collister's 'Country Breads' book is a recipe entitled 'Daniel's Cornish saffron bread'. I turned to the page expecting to find that Daniel is a Cornish master baker of many years standing. Nope. Daniel is Linda's six year old son, and he bakes a saffron cake each Sunday for tea. Now was the time to swallow my pride (and hopefully a tastier slice of cake), and admit that if a six year old could successfully turn out a saffron cake using this recipe, then there was HOPE FOR ME YET!

I bought myself some fresh saffron, and failing again to find fresh yeast, bought myself a new tin of dried yeast. Unfortunately my mum wasn't around to weigh out my ingredients, nor to negotiate the hot oven, but I thought I might manage this for myself.

1. Pop the saffron into the hot milk and give it a stir. You will start to see the colour leach from the strands. Glorious. Leave to infuse overnight. 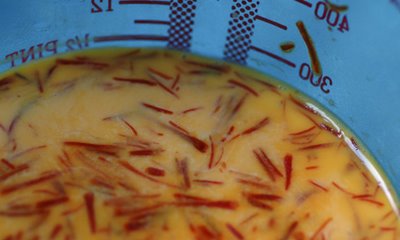 2. Grease a suitable sized loaf tin.
3. Put the flour and the salt into a large mixing bowl. Add the butter, and rub in with fingertips until you get the appearance of fine breadcrumbs. Stir in the sugar until well combined.
4. Reheat the milk to just below blood temperature. With the dried yeast I used I had to use this liquid to get the granules active, and the same applies to fresh yeast. Some dried yeast you can add directly to the flour, so check on the packaging.
5. Make a well in the middle of your flour and pour in the milk and yeast mixture (unless you have added the yeast to the flour - see above).
6. Fun bit. Using your hand work the liquid into the flour to form a dough, and then turn out onto a work surface and knead for 10 minutes. A great early morning workout.
7. Add the dried fruit to the dough (best done in stages) and knead for another minute until well combined.
8. Pop the dough into the greased tin. Put the tin into a large plastic bag (make good use of a nasty supermarket carrier) allowing space for rising, and tuck the opening of the bag under the tin to seal it. Leave the dough to rise to the top of the tin - this will take 1 - 3 hours depending on the kitchen temperature. My dough was ready to bake in 2 hours. 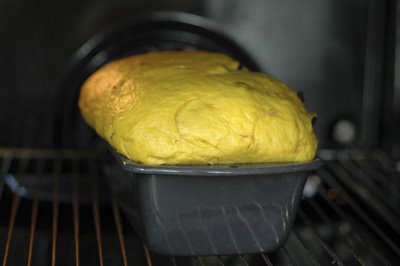 9. Preheat oven to 180C/350F/Gas 4. Bake your loaf for about an hour. The top will be a golden-brown, and the base of the loaf should sound hollow when tapped. Leave to cool on a wire rack. 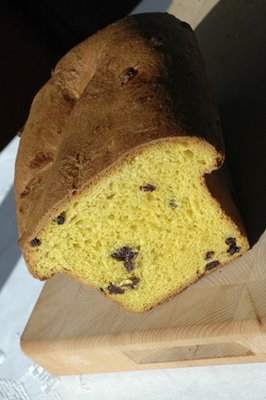 And I am pleased to say that this go at saffron cake making had a happy ending. The dough swelled beautifully, the loaf was a beautiful shade of sunshine, and the crumb was soft and succulent (like a brioche). The saffron flavouring (and scent) was unhindered by the addition of other spices. So, thank you Daniel. You are my new baking mentor. 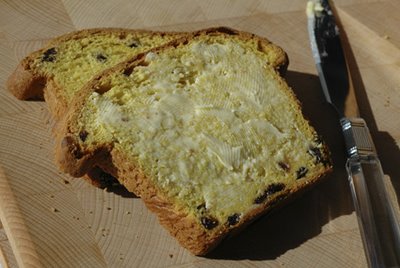