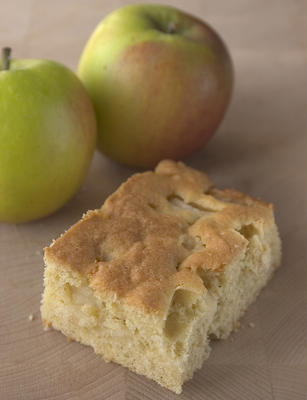 It is apple season in Britain now, and for that reason I thought I should look out an apple recipe to test. It is also a good incentive to search out the more unusual varieties of native apple. Unusual in the sense of hard to find, thanks to the way that supermarkets operate (although consumers should recognise their own responsibility to demand a broader range of varieties). I did a quick lunch-time apple shopping test at Marks & Spencer and Waitrose - both of whom claim to support British producers. Marks & Spencer disappointingly could only offer Royal Gala, Cox and Bramley apples grown in England (pretty standard fare that are easy to obtain from all large shops). They had other varieties too, but these came from France and Australia. Waitrose however scored much better. In addition to Royal Gala, Cox, Bramley, they had Spartan, Egremont Russet, Early Windsor, Regal Prince and Meridian apples. All were grown in Kent, so have come a short distance up the road to be sold in London. Of the varieties sold in Waitrose, and grown in Kent, not all are native to Britain - for example, the Regal Prince was first discovered in Angers, France. 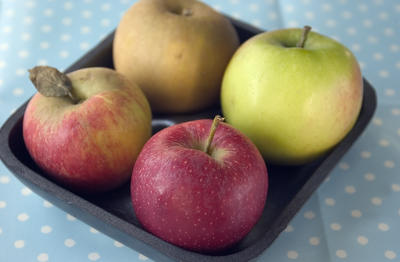 In Dorset, the areas around the towns of Bridport and Beaminster have a soil which particularly suits apple growing. Cider is made from some of the apples grown in the county, and in the past was used as a necessary supplement to farm labourers' wages.

Each year in October is held an Apple Day, to celebrate the season for best enjoying home-grown fruit. By complete coincidence (no, I am pretty sure that they haven't held it now to coincide with my Blog posting) in Dorset this year's celebration is being held today (15th October) in Symondsbury. 2005 has been designated Heritage Orchard year. For more information on events during October to celebrate English apples, click here.

There are many recipes for Dorset Apple Cake, as it seems to be one of those recipes which people find their own way with. As I have never tasted anyone's interpretation of the recipe, I have gone with the advice of a long-time Dorset resident, Marion Watson, who writes on The Great British Kitchen website that, 'most traditional recipes are based on the rubbed-in method mixed with milk to give a rather scone-like mixture.' My recipe comes from a page on Dorsetshire.com, and it follows the method just described (I am not sure if the rabbit custard recipe on the same web page would be a good accompaniment to the cake - I think probably not). 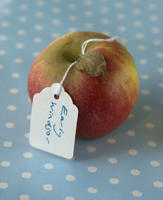 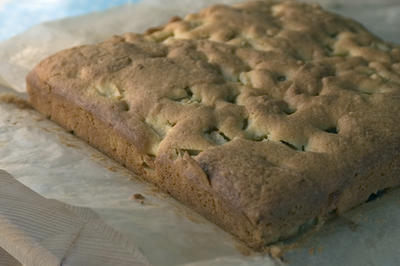 Whilst my cake was baking I put to the test another bit of information that I had gained on English apples. The Egremont Russets which I had bought from Waitrose are part of a group known as russets because of their distinctive matt/rough golden skins. Russets have a nutty tannic flavouring which once made them popular as an after-dinner accompaniment to port. Well, frankly I didn't need to be told that twice before I poured myself a large one, and cut up an apple to eat alongside. Fantastic! If you like port, then try it for yourself. 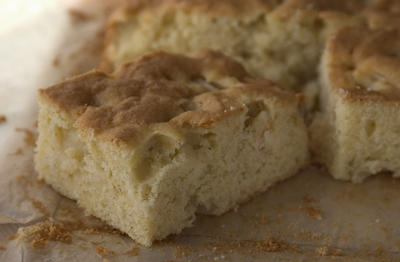 The cake didn't rise very much, which was fine, but it would be interesting to see the difference that using self-raising flour would make. The sponge was fairly dense and reminiscent of scone consistency. My taster and I agreed that the cake was a little too subtly flavoured, and that it could easily have had another one, if not two, apples added to the sponge base. The nutmeg spicing was a little indistinct, although this could be more a matter of personal taste. I also felt that this could be served warm with thick cream or (non-rabbit) custard. YUM! 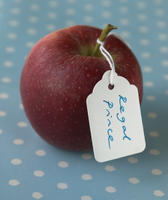 This is wonderful :) I made mine with Gala apples we picked on Monday. Thank you for the recipe!

I was really interested to see this recipe on your blog. You see my ancestors come from Dorset, actually Shaftsbury.
I am sure to make this recipe purely for sentimental reasons.

Thank you so much.

I made this today with windfalls my husband brought home - no clue what variety they are - but it turned out wonderfully and was very well received by my family Thanks :)

Can this cake be frozen?

I have not tried freezing it, but I don't see why not. Probably you would need to eat it fairly quickly after defrosting - but that is rarely a problem!

Thankyou for the recipe, I plan to make it for a Christmas present. I really appreciate hearing your verdict after making it, may add another apple or two!

My family comes from England, but I'm from America. This cake is delicious. We baked it with my Mom and sisters using Gala apples. We make it every week! Thanks so much for the recipe.

This cake relies on using cider apples, or under ripes of any variety. It is a early season cake that yearns for windfalls . I live here and enjoy this zesty cake as a bulk with cheese against cider.
Never make this with sweet apple as it turns into a pudding mush .
If you need to add lemon than you are using the wrong apples !!!
The correct texture is more like bread than cake. No-one in Bridport makes this right any more,
it's now only found in Chideock WI markets. To test, the cake must sping back once you've pressed it.
It should be carmelised brown and a slightly greeney wite in colour.

Thanks for the information. The apples in my cake didn't disintegrate into mush - perhaps I just got lucky?

Anna, you have such a beautiful blog! There are many recipes here I would love to try. I made a Dorset apple cake on the weekend and was preparing the post for next week. Since I did not know anything about that kind of cake, I did a little search and found your wonderful post. Those photos are fabulous!
I have added your blog to my feeder, since I don't want to miss your post anymore!

What a delightful recipe!
I tried this one out yesterday with a couple of varieties of apples fresh from Virginia growers (not markets; Our state's mountain areas happen to be prime apple growing country!).
Anyhow, the only alteration was adding a touch more than a cup's worth of apple.
The Dorset cake is a winner. Thanks for making the recipe available.

I have made this cake but have added sultanas and cinnamon instead of nutmeg.This turned out very well.

I actually live in Shaftesbury, Dorset and found your recipe from Google. Living in Dorset one would think I would have a recipe, well I do now. I baked my cake in a loaf tin, and it rose fairly well (I did use 2tsp of baking powder). It is currently cooling before tasting begins! Thanks!

would I be able to use granny smith apples? I have a large bag that needs using up!

I've tasted one when I had my vacation in one of the Dorset holiday cottages and it tastes good. I can now made my own.. Thanks!

My grandmother used to make this apple cake for me and my sisters every time we visited her when we were little and when I was old enough she taught me how to make it. Her recipe is similar to yours and it truly is a lovely cake, I will give this recipe a go soon for my children.

Thanks for such a lovely, informative post! I am reading Nigel Slater's Eating for Britain and researching some of the foods he discusses. THe Dorset apple cake was one of them, and your photos and information adds a terrific dimension.

Thanks for such a lovely, informative post! I am reading Nigel Slater's Eating for Britain and researching some of the foods he discusses. THe Dorset apple cake was one of them, and your photos and information adds a terrific dimension.

eToro is the ultimate forex trading platform for beginning and pro traders.