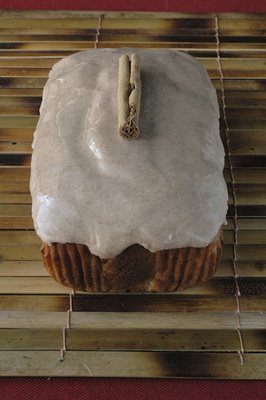 Well, I'm afraid it has been a little while since my last post. Of late it has been difficult to find a weekend with enough time free to research, write, bake and photograph, but I am aware that my opportunities for doing so may decrease further in the near future. Many weekends recently have been taken up with house-selling and house-purchasing activities; or we have been out and about test driving pushchairs or cot viewing. We are expecting our first baby in February, and all spare time seems to be focused on him/her, and relocating to Hertfordshire ahead of the big event (and possibly before Christmas). But today, I am making cake whilst the sun shines, and I have been inspired by the new county that I hope to be living in soon.

Hertfordshire is one of southern England's apple growing counties. The first commerical plantings of Cox's Orange Pippins were established there in the 1860s. The crisp, sweet and sharp, russetted dessert apple became one of the most popular varieties and is widely available today. I had bought a quantity of Cox's and Bramley apples with which to make some mincemeat, and having spent a morning in the kitchen inhaling the fug of warm spices, cider and the rich sweetness of cooked apples, I felt ready to bake a little something for immediate consumption (don't you think that 'fug' is the perfect word for cider related activities?).

My recipe is from the book 'Farmhouse Fare' by Countrywise Books. First published in 1973, it is a collection of country recipes gathered by the readers of 'Farmers Weekly' magazine. The recipes had been collected by the magazine since its launch in 1934; generally from the wives and daughters of farmers - those stalwart ladies at the heart of rural communities, who make good use of locally available ingredients, and produce from their own fields and livestock. My particular recipe was sent in by a Miss Mary MacDonald of Inverness-shire (Scotland), but it struck me as being the perfect recipe to capture something of the combination of apples, sweetness and spice that I had scented the house with whilst simmering my apple mincemeat. 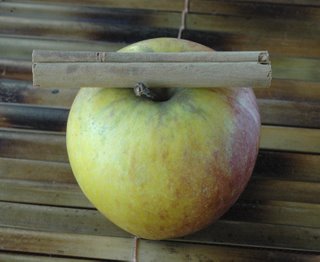 1. Preheat the oven to 180C/350F/Gas mark 4.
2. Grease and line an square or oblong cake tin (I used a loaf tin).
3. Peel and slice the apples, and put into a pan with 1 dessertspoon of sugar, and enough water to stop them from burning.
4. Stew gently until tender. Mash up and leave to cool.
5. Put the golden syrup, butter and the remainder of the sugar, into a pan and warm over a low heat until the sugar has dissolved. Leave to cool.
6. Sift the flour and the spices into a large basin.
7. Whisk the egg in a smaller bowl, add the cooled syrup mixture and continue to whisk until well mixed.
8. Add to the flour, along with the apple pulp. Stir well and then turn into prepared tin.
9. Bake for about half an hour.
10. Allow to cool a little before turning out of the tin. When fully cooled, prepare icing.
11. Sieve icing sugar and cinnamon into a bowl.
12. Mix with enough water to form a thick coating consistency.
13. Spread over the top of the cake and leave to set.

The gingerbread was a pale sponge, rippled with the flesh of the cooked apples. Lovely and moist. I was concerned that the quantity of cinnamon in the icing might be too tongue numbing, but it was perfect. Icing sugar is so saccharine, that the cinnamon had to fight hard to match the sweetness. The spiced icing complemented the cake extremely well, and added an extra flavour to the whole. This could be a nice alternative to the heavy fruit cakes served at Christmas time, perhaps with the addition of a handful of raisins. Plastic Santa is optional. 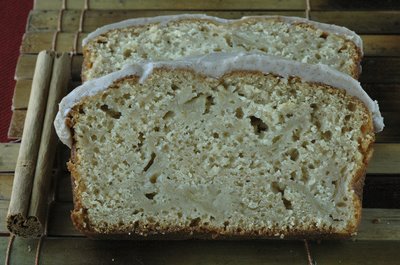