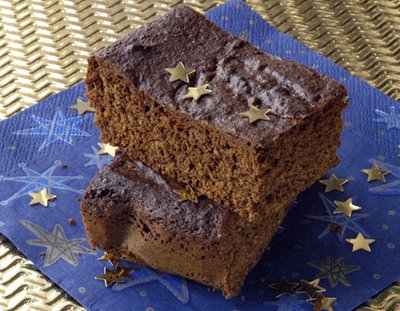 Ginger, long a popular flavouring in British cookery, was just one of the smaller things that we have the Romans to thank for first bringing to our shores. As an ingredient imported into the kingdom, for most people it was not an everyday taste. Thus it was a flavour enjoyed at festivals and feasts - fairings were ginger biscuits, and also popular at social occasions were gingerbreads or parkin.

In the bad old days before telly, any excuse for a bit of time off work, or for a pint or two of strong beer, was an opportunity to be seized (so things haven't changed all that much really). Unfortunately, this meant that less cheerful get-togethers, for reasons such as a public hanging or burning, were also a chance for a holiday, a slice of cake and a jug of ale. 'Holywake' is a 17th century word (in use in the Cotswolds) for 'bonfire'; more specifically meaning a bonfire lit to extinguish heretics. Holywake Bake was, according to June Lewis in 'The Cotswold Cook Book', a cake cooked and sold at such unholy gatherings. To my mind, the inclusion of oatmeal in this recipe makes it a Northern treat, as oats grow best in the Borders counties and Scotland. Oatmeal is a key ingredient in parkin (a type of gingerbread cake), which itself has an association with November the 5th. I decided to have a go at baking Holywake Bake Cake because I thought it interesting to find a bonfire story alternative to the well-known tale commemorated with thanksgiving explosions at this time of year. Sorry not to come up with something a little more cheery!

1. Preheat oven to 170C/325F/Gas 3. Grease and line a 10" by 7" tin.
2. In a large bowl stir together the flour, oatmeal, ginger, raisins (I excluded these) and bicarbonate of soda.
3. Put the syrup, treacle, butter and sugar into a small saucepan and melt over a low heat. Stir well to blend.
4. As soon as the above mixture has melted, pour into the dry ingredients and mix.
5. Add the egg and beat well. Add some milk now if you think it necessary - I didn't because I thought the mix looked OK, but the resulting cake could perhaps have benefited from it.
6. Pour into prepared tin and pop in the oven. Cake should take about an hour to bake.
7. Allow to cool in the tin; then turn out and cut into (12ish) squares. 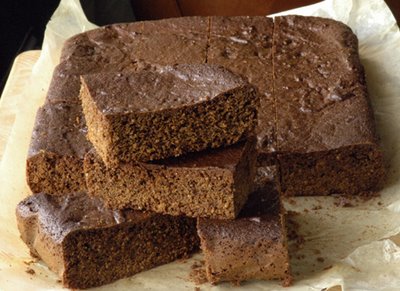 I followed June's suggestion and made this a few days ahead of November the 5th; the cake would grow moist and sticky if it were to be left in a tin for a short time. This is usually sound advice with gingerbreads, but this time round I didn't find that the cake improved any. In fact I was a little disappointed by it. Maybe that errant 1/4 pint of milk would have made all the difference, although I have found plenty of other gingerbread recipes that don't call for any extra moisture. Best consumed with a large mug of something wet and warming.
Posted by AnnaW at 10:11 pm 7 comments: