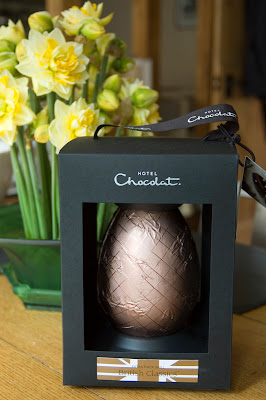 For my first posting after my young man’s arrival, I am going to keep things fairly simple. I am also writing under a tut-tutting of disapproval from my husband, not due to neglection of the little ‘un, but because I have accepted a commercial freebie in the form of a chocolate Easter egg from Hotel Chocolat. Now I was quite flattered to have a company contact me and offer to send me a luxurious Easter egg gratis, in return for my reviewing said item on my blog. Mainly because it suggested that somebody believed the readership of my site extends beyond me, and my mum and dad. I couldn’t see too large a dilemma, or too fatal a blow to my integrity (do let me know if you disagree!), after all I might try the egg and promptly demand it be scrambled. Hotel Chocolat presumably banked on my taste buds coinciding with their own taste values, but a review can go either way, and an Easter egg is a sweet of two halves…

I knew of Hotel Chocolat, but had never before eaten any of their goodies. Their leaflets fall from the Sunday papers from time to time, and I have previously got as far as going for a drool on their website. I once idly thought about buying myself a subscription to their Chocolate Tasting Club – such a fabulous idea, to receive regular supplies of top-notch chocs by post. Just as one polishes off one box, there goes the doorbell with the postman bearing a new box. Fab. There were two reasons why I didn’t sign up. 1. The idea of buying oneself a chocolate subscription just seemed a little too self-indulgent, even for me. It would be a fabulous gift. 2. I would have had to share the chocolates with my husband, unless I could come up with a subterfuge that would result in the chocolates being delivered to a neutral third party (work would have been too risky). Not that I don’t like to share with my husband, but when it comes to chocolate sometimes a firm line needs to be drawn.

So, to the egg. I should say at this point that I have made chocolate eggs in the past, so perhaps I do have some ‘expert’ knowledge that I can call upon for this important egg assessment. One year I made small solid chocolate eggs, by emptying the contents of a hen’s egg, and using the shell as a mould. Nice and simple. Then last Spring I went on a chocolate workshop at Leiths School of Food and Wine in London. During this day I learnt how to: 1. make a terrible sticky mess using chocolate and as many utensils as I could lay my hands on; 2. make some delicious truffles which resembled other brown objects not generally perceived as delicacies; 3. how to temper chocolate and create an Easter egg using a mould of two halves, and using a brush and melted chocolate to build up the shell. I recreated the moulded egg at home for my husband (you see, I can be generous sometimes), and ended up with an egg that needed a JCB to crack it open. The Hotel Chocolat egg claimed to have an extra thick shell, so I looked forward to seeing if it could compete with the bad boy I made.

I had been sent a British Classics egg. A 72% dark chocolate shell embedded with small fragments of cinder toffee, and filled with a selection of chocolate sweets chosen to be nostalgic but in a sophisticated way (a chocolate fondant mouse was included rather than a sugar one). The egg was carefully packaged in a very grown-up, although rather understated (I prefer a bit more campness) looking, black box, and this box travelled within another to arrive safely unbroken at my home. Each half of the egg is wrapped separately in foil and the chocolate goodies are in small bags within each half. A visit to the Hotel Chocolat website reassures me that the plastic element of their packaging will soon be replaced by a biodegradable alternative. However, the part that disappeared first in my home was the edible mouse. Cheeky devil - one minute on the table, the next nowhere to be seen. Chomp chomp. 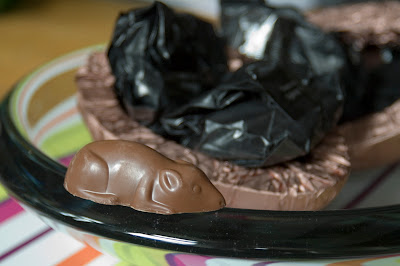 I sampled first the sweets. Large discs of stem ginger encased in chocolate. Chocolate covered cinder toffee (think v.posh Crunchie bars, but don't tell that to Hotel Chocolat). Dipped brazil nuts (brazil nuts are so GOOD for one, aren't they?). Marzipan with orange in a chocolate overcoat - very nice, but I could have readily munched the marzipan naked as I love the stuff (take that how you will). Sorry, don't know what happened to the mouse, but it was milk chocolate and filled with smooth creamy praline. As to the the egg. Well, I was impressed to discover that this egg did exactly what it said on the box. It did indeed have a extra thick shell, almost immodestly so. If the egg had been served up whole instead of in two pieces, I think it would have taken some serious heavy tools to force entry. Instead I gave my hands and teeth a good work-out.

So if I wasn't enjoying a free treat, would I be prepared to pay £18 for the egg? Do you know, I believe I would. It is definitely an egg to eat slowly and enjoy, rather than one that you end up bolting down in the time it takes to boil a you-know-what (don't tell me I'm the only one capable of such naughty gluttony?). For me dark chocolate is more of an after-dinner taste, perhaps with a chilled glass of something sweet (and we're not talking chocolate milk). This egg should last me at least a week of after-dinners, and that may also allow for sharing! 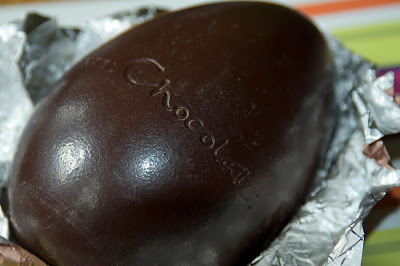 P.S. I had high hopes to make an Easter egg offering of my own to conclude this post with. I had decided to make some marzipan, form an egg, and then present it beautifully coloured and gilded. Unfortunately the result looked more like an Easter potato, and not half as appetising as a painted golden spud. It is better therefore that I sign off with an image of one of my little solid chocolate eggs (prepared earlier), so that I can continue to hold my head up high and wish you (a belated) Happy Easter. 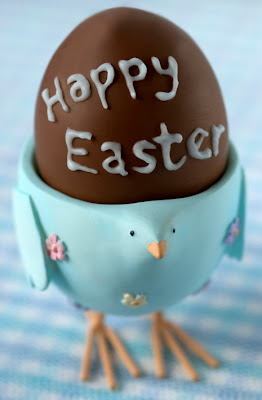