The important question of the day is - do you put cream on first and then jam on top; or do you smother your freshly baked scone with zesty fruit preserve and then top with lashings and lashings of thick, thick cream? If you like cream on top then this means that you follow the Cornish method of anointing your scone; and if you put jam uppermost then you are Devonian in your tastes. The folk of Devon and Cornwall both believe their way of dressing scones is correct and best. I feel a taste test coming on. 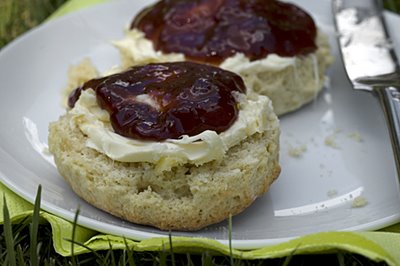 Scones in the Devonian manner - cream then jam. 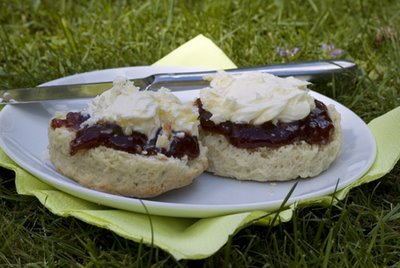 I have previously looked at the history of the scone, and found it to be of Scottish origin. Traditionally cooked upon a gridle or griddle over a open fire. When enclosed ovens and chemical raising agents were introduced in the 19th century, a new generation of scones was born. The Scots baked these new aerated scones and served them as part of their afternoon and high teas. However, other parts of Britain were not slow to also get baking these new-style scones, and in the West of England they were consumed with local products such as clotted cream and fruit preserves. In Cornwall black treacle is also a favoured topping - served along with clotted cream the combination is known as 'Thunder and Lightning'. 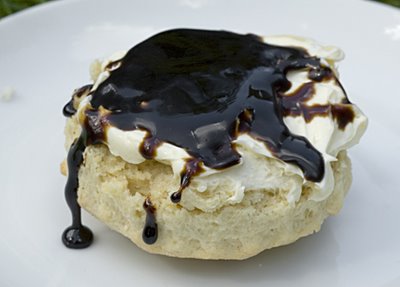 Scones are a favourite food of mine, but I confess it is a good few years since I have made a batch. I can see that good scone baking is a skill that may come with practice, but every scone-mistress or master has had to start somewhere. To give myself an advantage I am following a recipe from Linda Collister's 'The Baking Book'. In the introduction to her scone recipe she writes, '...over the last 20 years I've tried every recipe I've come across [Now, that's dedication] - ones using soured milk or buttermilk; risen with various combinations of bicarbonate of soda and cream of tartar, or baking powder; made with cream, or with golden syrup, with or without eggs.' Twenty years of practice must result in a damn fine recipe? Linda uses self-raising flour (so as to avoid a chemical aftertaste), a pinch of salt, golden caster sugar, butter, an egg and a little milk. Her recipe suggests that you make the dough up in a food processor as this brings the dough together quickly, with the miminum of handling.

Makes 8 scones when using a 6cm fluted cutter
(might appear to be a modest quantity, but when split and topped with cream and jam this will seem like a feast)

1. Preheat oven to 220C/425F/gas 7.
2. Sift flour and salt into a bowl, then tip into food processor.
3. Add the sugar to the food processor and blend briefly to mix the sugar into the flour.
4. Add the diced butter and pulse until the mixture is lump-free and has the look of sand.
5. Mix the egg and milk together, and then pour into the food processor whilst it is running. You need to keep an eye on the mixture, for as soon as it comes together into a soft ball of dough you need to stop the machine. If dough looks too dry add a little more milk.
6. Remove dough and turn onto floured surface. If the dough is sticky work in a little flour (gently does it). Otherwise, knead the dough carefully - just enough to bring it together into a neater ball, and then pat out on your work surface (use your hands). You need to only press the dough to a depth of about 2cm. Use your cutter to cut out circles of dough. Use the trimmings left to form a second ball of dough, pat out again and then cut more circles.
7. Arrange the circles of dough on a prepared baking tray and pop straight into the oven. Keep an eye on them. The scones should take 12-15 minutes, or should be extracted when they have gone golden brown on top. Put onto wire cooling rack as soon as they leave the oven. Cover with clean tea towel to help keep moistness in.

Scones baked and cooled, I headed out to the garden to conduct some scone sampling.
I present the naked scone... 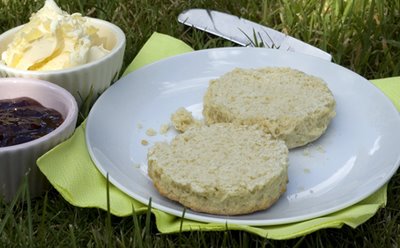 The scones were very light, almost of melt in the mouth crumbliness. This did prove to be a perfect backdrop to the more substantial weight of the cream, and to the more assertive flavour of the jam. I don't think that they were THE ultimate scones, but they were very good (they could have been a little moister I think). As to whether the Devonian or Cornish order of topping was the best, I will have to sit on the fence and say they both work very nicely. However, the black treacle and cream was not for me. You would have to be a real fan of the flavour of treacle to like this as it has such a strong taste. 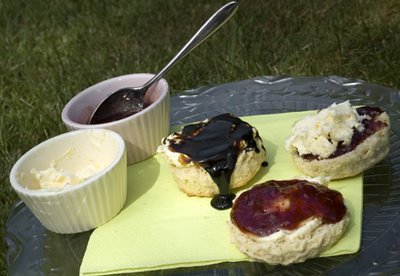 Which would you choose?... 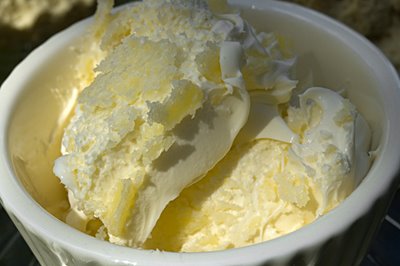 Brazilian Linda kindly nominated me to take part in the latest circulating Meme.

Five Things in my Freezer

We only have a small icebox at the top of our fridge, but it is amazing how much you can cram into it. Amongst those items lurking/imbedded in the ice are:

1. Blackberries picked last summer from along the banks of the Thames.
2. Unmarked containers of homemade soups.
3. Edamame.
4. Bits of chicken useful for soup making.
5. Chopped up brown banana - perfect for putting into cakes.

Five Things in my Closet

Five Things in my Car

We don't own a car, and I get to work each day by bicycle. A peak in the panniers reveals:

1. Sun glasses. Crucial to forget these on sunny days, and find it turn grey and wet on days when I am wearing them.
2. Spare carrier bags for wrapping things in when it rains.
3. Bungee clip for attaching objects to my bike. Generally this doesn't work, but I have brought flowers home using it.
4. Puncture repair kit.
5. And on my return home from work each day, my panniers are packed to the rafters with food for the evening meal. Wine bottles at the bottom and squashable fruit at the top.

Five Things in my Purse

1. Money-off vouchers way past their expiry date.
2. A photo of my husband (to frighten off any would-be purse thief?)
3. Business cards for my blog.
4. Lots of plastic - in the form of store loyalty cards, library membership etc., rather than access to fabulous amounts of credit.
5. Many, many old reciepts.

I would like to follow on and tag the following bloggers - the first four ladies I came into contact with through the Euro-Blogging by Mail events, and Pille I met in person at the last UK food bloggers get together. I love the fact that all these sites and individuals represent different countries or different cultures. Plus, you 'meet' the nicest people blogging...

Check out their sites:

Eva at The Golden Shrimp
Fanny at Food Beam
Nicky at Delicious Days
Dagmar at A Cat in the Kitchen
Pille at Nami-Nami
Posted by AnnaW at 6:49 pm 8 comments: