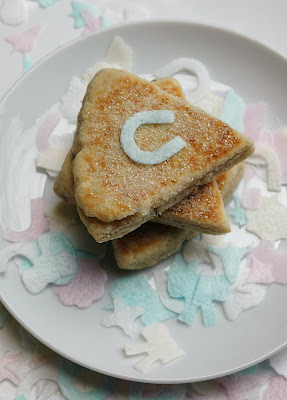 Shetland bride's bonn/bun or bridal cake was traditionally baked by the mother of the bride. It was broken over the bride's head as she entered the marital home after the wedding ceremony and was intended to bless the marriage with prosperity and fertility. This breaking of cake was a wedding tradition observed in many parts of the country, and indeed is also a feature in the wedding traditions of other countries.

In Shetland, the bride's bonn/bun was also known historically as either infar-cake or dreaming-bread. F. Marian McNeill has a note regarding infar-cake or dreaming-bread: ‘A decorated form of shortbread is still [1929] the national bride’s-cake of rural Scotland, and was formerly used as infar-cake. The breaking of infar-cake over the head of the bride, on the threshold of her new home, is a very ancient custom, having its origin in the Roman rite of confarratio, in which the eating of a consecrated cake by the contracting parties constituted marriage. (Scots law, unlike English, is based on the old Roman Law.) Portions were distributed to the young men and maidens “to dream on”.’ At christening feasts a dreaming-bread may also be distributed to guests, for the same purpose of giving maids and young men a sneak preview of their future partner - dreaming-bread is also known as dumb-cake.

Mark Morton in 'Cupboard Love', further explains the Roman roots of the cake-breaking act: 'Romans solemnized marriages through the rite of confarreatio, a word literally meaning to unite with grain-cake (the far in the middle of confarreatio is the Latin far, meaning grain, a word that also appears in farina and farrago). In contrast, the English infare literally means to go in, deriving as it does from the words in and from the Old English verb faran, meaning to go or to travel. Before it was specifically applied to cake, infare could also refer to a feast provided for guests when someone, newly married or not, took possession of a new home.'

Although Shetland Bride's Bonn is generally classified as a shortbread, when cooked on a girdle (griddle), as it would have been historically, it is closer in form to a bannock or scone. When oven-baked the bonn would be crisper and more biscuit-like. My recipe comes from 'A Cook's Tour of Britain', by the Woman's Institute and Michael Smith (pub. 1984), and I have gone with the girdle cooking option.

1. Rub the butter into the flour.
2. Add the sugar and caraway seeds.
3. Mix to a stiff consistency with milk (get your hands in the bowl to achieve this, and add only a little milk at a time - start with a generous splash).
4. Roll out into a round shape. Now at this point the book suggests that you roll a round 5cm/2 inches thick, but this is way too thick for this small quantity of dough, plus it would never cook in the time given. My dough was about 2cm thick. Cut the round shape into triangles.
5. Bake on a fairly hot girdle for 3 minutes on each side, or in an oven at 180C/350F/Gas 4 for 20 minutes.

I gave the caraway seeds to my junior helper to sniff, but he promptly stuffed a few in his mouth and demanded more. That's my boy! He was less enthusiastic about the finished cake, but then he had just finished a rather large lunch. I must teach him the benefits of pacing your food consumption, and that chocolate buttons don't always have to be downed in one hand/mouthful. I found the cake pleasant enough, but as a cross between a pastry and a scone it is best eaten fresh. I forgot to sleep with a morsel under my pillow, but I would only have had to disappoint Johnny Depp by explaining I am already married. 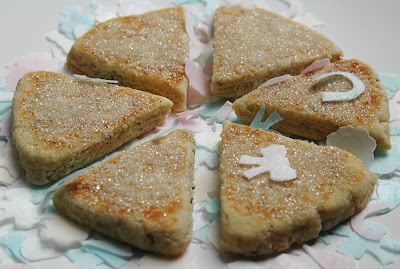 For more information on the Shetland Islands and local food and drink - click on The Shetland Food Directory, or take a look at this site if you want to be completely seduced and find yourself moving north (west/east/possibly not south).
Posted by AnnaW at 1:18 pm 72 comments: