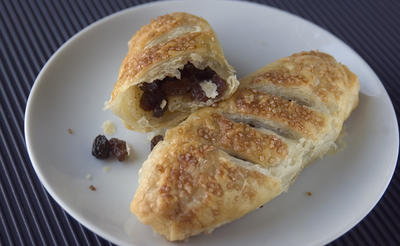 Banbury, Oxfordshire, may be a familiar place name to those who know the children's verse:

'Ride a cock-horse to Banbury Cross,
To see a fine lady upon a white horse,
With rings on her fingers and bells on her toes,
She shall have music wherever she goes.'

The town still retains its landmark cross, although the Puritans pulled down the original. The cross today stands in the middle of a traffic roundabout, and was erected in 1859 to commemorate the wedding of the then Princess Royal to Prince Frederick of Prussia.

Banbury cakes although not mentioned in the well-known verse, have become just as much of a symbol of the town. They have been made there from at least the early seventeenth century. At one time they were exported to places as far afield as India, Australia and America. A modern local newspaper makes use of the name as its title.

The cake shop in Banbury most closely associated with the cakes for many years was known as The Original Cake Shop, at 12 Parsons Street. The building dated back to the seventeenth century, and this served as a cake shop until it unfortunately fell into disrepair and was demolished in 1968. Also well known was Betts' Cake Shop at 85 High Street, run by a great grand-son of Betty White who set up The Original Cake Shop. See also the second postcard on this page.

There are many recipes for the cakes. The earliest one I could find via the internet is that from Gervase Markham's 'The English Hus-Wife' of 1615:

'To make a very good Banbury Cake, take four pounds of Currants and wash and pick them very clean, and dry them in a cloth; then take three Eggs, and put away one yolk, and beat them, and strain them with Barm, putting thereto Cloves, Mace, Cinamon and Nutmegges, then take a pint of Cream, and as much mornings milk, and set it on the fire till the cold be taken away; then take Flower, and put in good store of cold butter and sugar; then put in your eggs, barm, and meal, and work them all together an hour or more, then save a part of the paste, and the rest break in pieces, and work in your Currants; which done, mould your Cake of whatever quantity you please, and then with that paste which hath not any Currants, cover it thin, both underneath, and aloft. And so bake it according to bigness.'

This recipe would make something closer to an enriched sponge or bread, with a piece of dough containing currants sandwiched between two currant-free pieces of dough. The modern version of the recipe uses puff pastry, and the filling is a mixture of currants, peel and spices. The recipe used today in Banbury town is a secret, but is said to also include rum and brandy. The cakes have a distinctive shape, a pointed oval shape marked with three cuts. 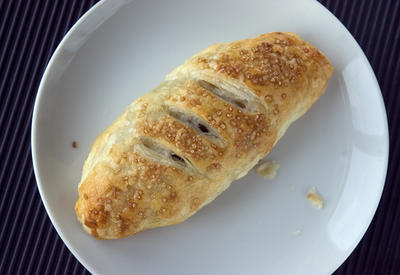 I have to confess that I started off by following what claimed to be the recipe from Gervase Markham's 1615 instructional book (having at that point not seen a transcript of the original), but when I started weighing out the ingredients and I was a bit concerned by the small amount of currants for a 500g weight of pastry, that I went back to the computer to do a hasty bit of extra research. The recipe I had started following is here. If you click on the link you will also see a small illustration of the cakes, which are alongside a specially shaped basket used for transporting the cakes.

So having discovered that the 1615 recipe was not made with puff-pastry (perhaps I should have guessed that?), but having bought said pastry and already rolled it out, I decided to press on with the adapted recipe. I too had to tweak the recipe to work with a slightly smaller quantity of pastry. I used a proportionally larger amount of dried fruit because I didn't want the cakes to all pastry and no filling.

1. Pre-heat the oven 220C/425F/Gas 7.
2. Dig out a baking sheet and either grease or cover with a non-stick liner (what a great invention).
3. Roll out the pastry thinly (mine was pre-rolled - how lazy is that. In my defense the pre-rolled stuff was on buy-one-get-one-free at Waitrose).
4. Cut into circles. My recipe suggested 18cm/7 inch circles (i.e. draw around a saucer), but that would have used all my pastry up with three cakes. I found a small bowl in the drawer and drew round that. Even so I only managed eight circles.
5. Mix together the butter, dried fruit, spices and sugar, and put a small amount of this into the middle of each circle. Don't get too carried away else the filling will be too big for the cake.
6. Bring up the sides of the circle so that it looks as if you are creating a mini Cornish pasty. Crimp the edges together firmly, and then turn the cake over so the seam side is down. Press down on your cake to flatten it slightly. Put onto baking sheet.
7. When all your cakes are assembled brush with the egg white and sprinkle with the demerara sugar. Cut three slashes into the top of each cake. 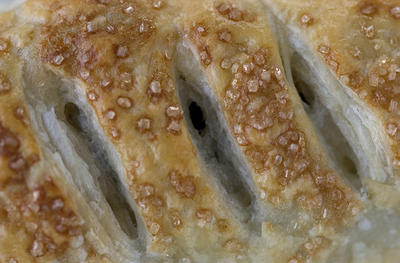 The resulting cakes were a pleasing golden colour, and the pastry was very light (I can't take the credit for that unfortunately, but I shopped wisely!). The filling of spiced fruits made me think ahead to Christmas and mince pies hot from the oven, and I felt that I had got the proportion of filling to pastry just right. Some of my cakes had open bellies where my pastry crimping had come loose, which meant the fruit all fell out mid-way to my mouth. If I were to make them again I would keep an eye on this, or eat faster. 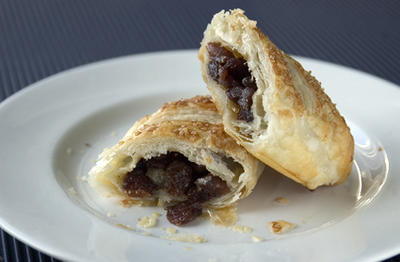 Hi Anna
I couldn't find your email address, though I know I must have it somewhere in my inbox from the IMBB19.

We are having a Brit food bloggers get together in London in a couple of weeks and I was wondering if you would like to join us.

You can find the details here

Ahha! Perfect! You'll be able to help me out over my self imposed and somewhat daunting Best of British month...

Further to your article on Banbury Cakes there is now another tasty item called BANBURY TARTS.Its a very organic product with recipe roots going back possibly as far as the late 1700's.
Backed in a sweet shortbread casing the mixture is of figs,walnuts,home made peel and butter, sugar , eggs etc etc
For more details go to www.puddingpie.co.uk

I look forward to trying a Banbury Tart when I next pass through Deddington - they sound delicious! Well done to you for reviving the recipe.

I have tried these Tarts, you need to get your hands on some, they are completly different from anything I have ever tasted and they are fabulous, loveley with cream they really are something special, I bought them from www.banburytarts.co.uk

Thank you so much for the wonderful pictures and descriptions!

I am researching Banbury cakes for the play at my high school, "Still Life," which takes place in a 1930's English train station.
We weren't sure what the props for the "Banbury's" should look like.

Thanks again for the help!

Good luck with the show! I spent three years at theatre college studying theatrical design, so I really admire your attention to detail.

Perfect! You'll be able to help me out over my self imposed and somewhat daunting Best of British month...

I was living in Banbury at the time the shop was demolished, it did not fall into disrepair it was deliberately destroyed by the builders so that it had to be taken down.

I was however lucky enough to buy and eat the cakes for years .

At 61 I still make the cakes and receive many compliments for my Eccles cakes, I always point out they are Banbury cakes.

Further to Chris's comment - an injunction to stop the proposed demolition was placed on the developers who had acquired the cake shop. As I remember it, the demolition went ahead, safe in the knowledge that the maximum £1,000 fine was i) a cheaper option than losing the already invested money ii) more than made up for by the prospective value of the development.

Banbury was outraged and felt the Oxford, where the jurisdiction had taken place, had not served the town well and was too removed to care.

I was 13 at the time and lived in the villages, but it was a point of discussion in our household as it was in most local homes at the time.

I read your blog about cakes and sweets, the wording that you choose is very much good and outstanding, I liked very much for your communication, #Cakes in Dubai.. also one of the best and good point of sweets and cakes ,
cheapness is the reason being that of this country and other areas people most prefer to sell their items #For more detail click here