Whilst in Deddington, Oxfordshire, and already feeling inspired for my next post (I am obviously on a roll at the moment!), I came across a shop that sold genuine, 100% authentic Banbury Cakes. Banbury is just up/down the road from Deddington. Having previously made these, I bought myself a packet so that I could see how the original compared to the home-baked. 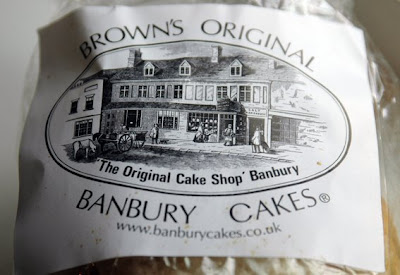 From a visit to the Brown's Original Banbury Cakes website, I was delighted to learn that the current owner/baker, Phillip Brown, is related to Banbury Cake bakers dating back to the early 19th century. He himself is a direct descendent of E.W. Brown who ran 'The Original Cake Shop' from 1868 - her name appears over the door in this photo from 1902. Phillip Brown hand bakes his Banbury Cakes, and they are available for purchase online, and from a select number of shops (including A. Gold in London).

Since I wrote my earlier post about Banbury Cakes I bought Florence White's book 'Good Things in England'. She has a 'modern' recipe (dated 1929) for Banbury Cakes (alongside Gervase Markham's recipe from 1615), that is apparently for the 'same type of cake as those sold by E.W. Brown'. An indiscreet plug for the cakes reads, 'Anyone who wants to buy the best Banbury Cakes ever made can buy them from E.W. Brown, 'The Original Cake Shop', 12 Parson Street, Banbury, Oxfordshire. The recipe given is almost identical to the one that I baked for my Banbury Cakes. 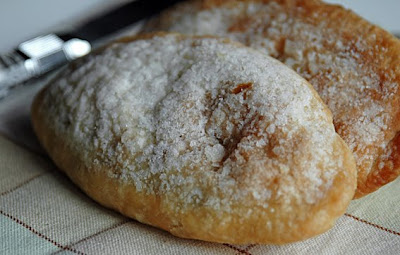 My purchased Banbury Cakes were oval in shape but lacked the three slashes on top that my recipe had instructed I cut (as does the one in Florence White's book). The tops were crusted with sugar, but differed from my efforts in that they were most likely brushed with egg white and then dusted with caster sugar. I used demerara, but this may have been an embellishment of my own devising.

The pastry was, unfortunately, a little travel weary. The Banbury Cakes had only a short excursion in Ellis' changing bag, but this did compress the cakes a little. I felt that the cakes were probably best enjoyed as fresh as possible, and although they had a best-before date of almost four weeks hence, the pastry was a little dry. However, the filling of fruit, spices and sugar was positively fudgy, my only complaint was that there wasn't more of it. All in all I felt my own efforts were pretty decent - certainly in terms of the outer (hmm, to be fair I bought my pastry), and if I were to remake the cakes I would make the fillings with a little more sugar so that they could melt on the tongue in the way Mr. Brown's cakes did. 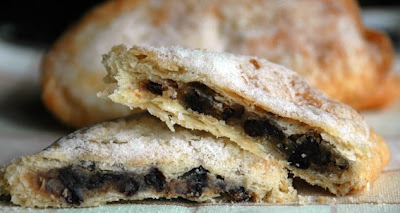 How are these different from eccles cakes? Is it the spices?

Eccles cakes are more densely loaded up with dried fruit, and the pastry outer is sturdier and more case-like. I imagine that there is also a difference in terms of the spices, but commercial manufacturers like to keep the specifics of such ingredients to themselves, and domestic recipes always vary such details.

How do you do.
I hope to see blog.
Please link to this site.

Hello Anna - a nice story, thankyou. I was in Oxford last September for the Symposium on Food and Cookery, but ran out of time to visit Banbury. I am going to attend it again this year, and will make sure I visit this shop. I too wondered about Eccles Cakes - I grew up in Yorkshire, and they were common, but I dont remember Banbury Cakes at the time. Regional variations I guess.

these look wonderful! I would love to try them sometime...I have an affinity for British pastries and sentimental connections with "Banbury" so I'm putting them on my to-do list. cheers!

They do look nice - I do like these type of cakes

I have a recipe I want to try out for Banbury cakes and you have just reminded me - thank you :) They do look so delicious I can taste them now having the real thing some years back now.

Ummmmm!!!. They seem quite delicious. Never tried them although I spent a summer at Oxford.
I'm going to look up in your previous posts for the recipe.
It's time I read you from Spain.

I know this shop as my parents live nearby.
Delicious banbury cakes!

Not sure how to contact you so hope you think this up.

I really love your blog (found it when searching for Oxford Pudding recipe) and have put a link to it from my site at http://kitchen.history.googlepages.com

My site's designed to collect family recipes - one for each generation. Kind of fits with your food history strand.

I hope this is OK - very happy to take it off if you don't like the look of my site or for any other reason.

If you'd like to leave a recipe or two or three while you're there that would be awesome!

I've just discovered your blog...and I love it! Cheers!

Wow, this looks so yummy. Cakes are one of my favorite,I can't wait to try this!

It seems to be really tasty and crunchy. I had never seen such a cookie before. I think I will try.

Eccles cakes are more densely loaded up with dried fruit, and the pastry outer is sturdier and more case-like. I imagine that there is also a difference in terms of the spices, but commercial manufacturers like to keep the specifics of such ingredients to themselves, and domestic recipes always vary such details.
free bingo games

healthy food for a diet

hi there I'm working on a BBC food series about regional dishes and am keen to make contact with you.! please could you call me on 0303 080 4703 or email me at laura.abrahams01@bbc.co.uk please and I'll explain more! best, Laura

Hi,
Can anyone help me.
I live in the Surrey area of England and while growing up some 50 years ago I helped deliver cakes for the co-op.
Banbury cakes were my favourites, but these I remember were made with the returned stale fruit cake from the day before and spices, one of which was cinnamon. they were not like eccles cakes at all, except in shape and size.
I would love to recapture the taste and texture of these particular cakes, but have never seen or heard of their like since. If anyone could help with a recipe I would be forever grateful.
Mr Les Drover.

Similar to any other machine, you as its user need to keep in mind the essence of maintenance and care. Following the right methods in doing so can ensure that the burger patty maker will last longer and at its finest condition at all times. A little thing that would mean a lot is to ensure that there will no bits of meats left within the machine while you store it. The manuals would be very handy to get other vital pieces of information about the machine.

Well, do you like to cook well I do if you see it on my apron I love cooking. COOKING INSTRUCTIONS|BAKING CAKE|BEATING EGG|

Thank you for sharing your words, write something about top bakery in Karachi as well.

To begin with i must appreciation for the truly amazing and informative entry. I have to admit i never learned about this data. I have noticed many new facts in my opinion. Thanks a lot for sharing this useful and attractive information and i are going to be expecting other interesting posts of your stuff in the nearest future.
wedding cakes Singapore

Nice information & i am always happy to reading your posts!
Please read va vs ips, ips vs tn vs va, tn vs ips.

Hello, I find reading this material fascinating. It's quite helpful and informative, and I'm looking forward to reading more of your work. I appreciate the factual information you provide in your writings.

I'll save your blog and return here frequently. I'm confident that I'll gain some valuable new experience here! Best of luck with the following!


For more details, you can Click here,
Visit here

Thanks for the great information. I know the amount of effort you put into this as a blogger. Thank you so much. After a lot of searches, I found this article cps test which helped me to improve the seconds on my clicking, the tool given here is very good.