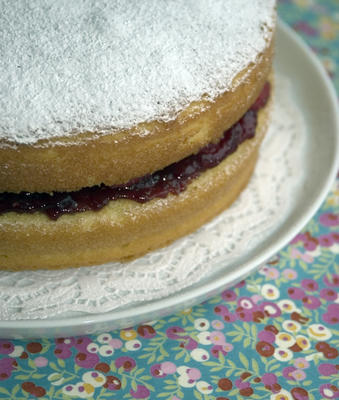 To start my baking journey I decided to kick-off with a classic cake. The Victoria sponge cake is eaten throughout the UK, and owes its name to a past monarch. After the death of Prince Albert in 1861, Queen Victoria spent time at her house on the Isle of Wight, withdrawing herself from society. In order to inspire the monarch to get back into the swing of civic duties, Queen Victoria was encouraged to host tea parties, at which the soon-to-be-known-as Victoria sponge cake was served. Victoria sponges became fashionable throughout Victorian England, and also became the measure of the home-baker.

To be able to produce a well-risen home-made sponge cake is still a domestic skill keenly prized. Think of the competitive bakers of the Women's Institute, as portrayed in the UK film "Calendar Girls', where the prize-winning sponge is shockingly revealed to have come from Marks and Spencer rather than being home-made. I admit that I had never made a Victoria sponge cake, which seemed a good enough reason to try my hand at one, and test my baking abilities.

I looked at various recipes, and decided to try Nigella Lawson's recipe from the 'Domestic Goddess' book. Her recipe includes corn flour alongside the self-raising, which she claims makes for a lighter cake. Having only ever used corn flour in sauces and soups, I was intrigued. The only variation I made to her recipe was to use two table spoons of rose water, in place of two of the four table spoons of milk. I planned to fill the cake with raspberry jam, and thought the hint of rose flavouring would be a nice complement.

Nigella's method is to stick all the ingredients into the food processor. Works for me! Creaming butter and sugar together until pale and fluffy is too much hard work by hand.

So, what of the cake. Would I get the first prize at the W.I.?

Well, I was a bit disappointed by the level of rise, but at least the sponges didn't sink once they came out of the oven. However, filled with jam and fresh raspberries (another Nigella suggestion), they stacked up nicely to produce a good proportioned cake. 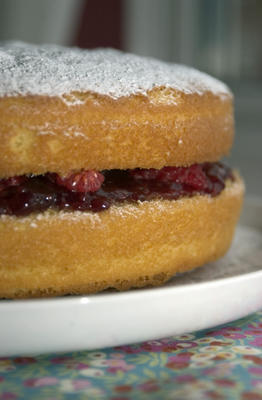 I decided against putting cream as well as jam in the cake. Much as I like cream, I find it a bit much in an already (butter) rich cake. The fresh fruit gives a refreshing 'bite'. 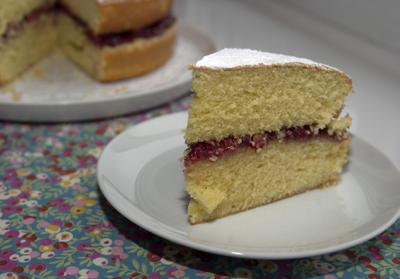 The cake was beautifully light (down to the corn flour?), which made it easy to eat an enormous slice. I hope that Queen Victoria was as pleased with her cake! 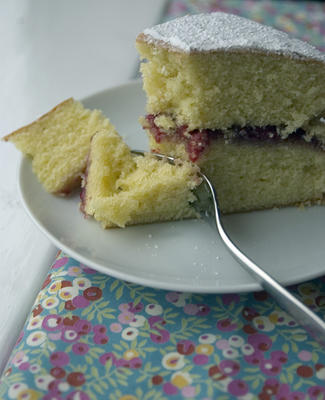 If this is going to be a regular blog it will make any readers v.hungry!

Do provide accurate references to recipe books, or the recipe itself.

Hi Hector, I do plan to add to this blog regularly. I have a huge list of nice bakes that I want to try, so have no shortage of inspiration. Regarding the recipes; I am happy to give out the exact source, but unless it is a recipe devised by me I think there would be a copyright issue with me putting them online. However, I take your point and shall include my sources from now on. The Victoria sponge cake recipe is from Nigella Lawson's 'How to be a Domestic Goddess', page14, Chatto & Windus 2000, ISBN 0 7011 6888 9.

Hello. Im new to the blog, but Im loving it already! The Victoria sponge looks lovely- the picture in my copy of that cookbook always made me long to try it myself.

As for copyright issues- my understanding is that as long as you cite your source, its ok to reprint the recipe online. More specifically, its the list of ingredients that are copyrighted- the instructions, especially if you paraphrase, are not protected. Hope that helps!

I think I will start adding the recipes to the site. As you say, as long as I give the source, and credit to the author (so am clearly not passing them off as my own) then it should be OK. When I come across dishes on other blogs, it is good to have the recipe to note down.

Going back to Nigella's book - I think I would next like to try the lemon curd and marscapone cheese filled sponge! (p15). I love anything lemon flavoured.

Anonymous said...
This comment has been removed by a blog administrator.
12:00 pm

i made a lovely sponge for my son's birthday (4) and i usually have catastrophic results.

The cake looks delicious, i look forward to finding out the recipe and using it in my cooking class next week, hopefully it'll be a tasty success

Hi there, love your blog, it's really fab to read up on all the British recipes that you're baking. I don't think you'll mind if I add a link to you blog on our website, which sells all british made gifts and interiors, have a peek and add to one of your blogs if you don't mind...
http://www.greattreasures.co.uk

Sorry for my English, I'm French!
I did my first Victoria sponge 2 days ago! I did the recipe by Delia Smith (all butter recipe)!It was very long and quite difficult to do (and no corn flour!)but it was just a dream!!!I loved it...OK it was not as nice as yours but I'm quite proud of myself!
If you want to have a look here is the link to my blog: http://foodaddictedin2008.blogspot.com/
thank you for this very nice blog!

Apparently you need to leave the cream out anyway for it to qualify as a real WI sponge...like the idea of adding raspberries, good stuff

I am writing with a general enquiry. I have a new website called 'Directory of British Icons'.

One section of My Directory is a Listing of Traditional British Foods and links to same.

My goal is to have all British icons listed in my directory with links to the relevant website.

As your excellent website is one of those I am linking to from my website would it be possible to link to my website. As you know the more links a website has the higher the Page rank and the easier to find on the net.

Hi Anna, just wanted to tip you off that I believe someone stole your victoria sponge photo and is using it on her blog, unattributed. I didn't want to leave her a comment about the breach of ethics, in case she had indeed acquired permission from you in advance. I also don't want to publicise her blog here, but if you do a google search for Nigella victoria sponge, her site is among the first results. She may just not be aware of copyright issues, but I'll leave it to you to follow up if you want to. I know if a fellow blogger found one of my photos being used, I'd appreciate hearing about it!

Always been a big fan of Victoria sandwich cake. Memories of my childhood and my mums baking :-)
My choice of filling is a good strawberry jam and fresh whipped cream, delish!

Lovely looking cake! Well done! Will it win a prize with the WI? Not if you put icing sugar on top - it has to be caster sugar! I found out the hard way.

wow, thats looking amazing… i want to try that my own. Thanks for sharing recipe and greetings from our too early summer holidays in the alps

write with us said...

Baking strategies in order to make your cake fluffy or spongy would rely on the ratio or proportion of ingredients you are about to use over baking cakes these should count over the egg whipping as well mixing of the flour advises Baking Classes in Velachery .