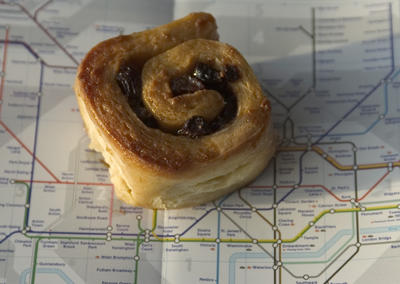 Chelsea buns were created at The Chelsea Bun House, an establishment which was situated on the borders of Chelsea and Pimlico, London, and only a stone's throw (well, a hefty lob) from where I work. The Chelsea Bun House was in business for the best part of a century; eventually closing it’s doors in 1839. At the height of its success in the 18th century it was frequented by high society, including Kings George II and III, who called in for a bun en route to the nearby Ranelagh Pleasure Gardens. The Bun House was also noted for its hot-cross buns. Legend has it that on Good Friday in 1829, 240,000 hot-cross buns were sold, and crowds of over 50,000 thronged outside the shop in anticipation of delicious buns hot from the kitchen’s ovens.

Sources disagree about the exact historic location of the Bun House– either Grovesnor Row or Jew’s Row according to what you read. Neither exist now, but in today’s Pimlico there is a Bunhouse Place, which is within strolling distance of the remains of Ranelagh Pleasure Gardens. I would like to think that this might be very near to the spot where the bun shop was. What a great address to put on your letterhead!

Chelsea buns are made from enriched bread dough, filled with dried fruit, coiled into a distinctive spiral shape, and then smothered with a sticky honey glaze. Sounds good? My experience of the ones we were served at school had soggy bottoms, and were filled with what we were pretty sure were dead flies. The best thing about them was unrolling them to eat them (and to pick out all the dead insects). Jane Grigson in ‘English Food’says that Chelsea buns are, "the best of all buns, on account of their melting buttery sweetness."– so here goes!

My recipe comes from Linda Collister's 'Bread - From Ciabatta to Rye'. Linda's recipe is for 'Miniature Chelsea Buns', which appealed to me as I like petite cakes! However, I guess the size of the bun comes down to how you roll your dough out, rather than the ingredients or the method - still, the novelty worked for me. 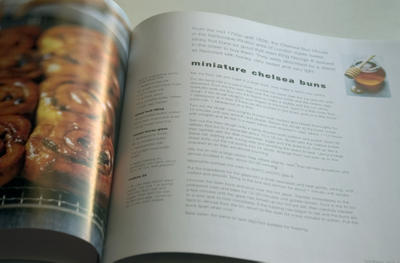 I got up nice and early on Saturday morning to start my dough off, as the mixture needed two risings prior to baking. I put all the ingredients together, did my 10 minutes of kneading (always makes the hands nice and soft - is this a good thing?), and then put the dough into a bowl, covered it with clingfilm and sat back to watch it rise. Well, you know what they say about watched kettles. I thought perhaps I had killed the yeast with melted butter too fresh from the microwave. I then decided that it was the decidedly autumnal temperature of the kitchen, and switched the central heating on for the first time since Spring. How well I treat my bun mixture! I found the dough a snug resting place, and decided that if it needed a few hours to rise then I may as well whizz off to the real Chelsea to view the bun's origins. Hoorah for London Underground! 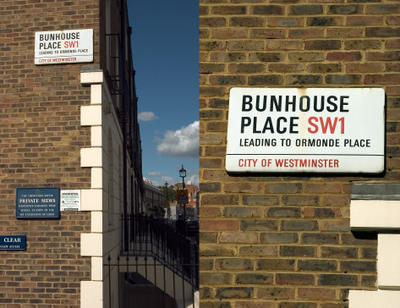 Bunhouse Place is a short walk from Sloane Square underground station, and is now a mix of contemporary townhouses in a Regency style, and mews housing. The road itself was obstructed by building work, so I could only really get a photo of the place-name on the sign. If previously I had been passing the road I would not have known the story behind the name, so it was nice to have gained that insight.

Back to the kitchen...

The dough had risen whilst I was out and about, although it had only just struggled to reach the size Linda suggested (doubling). I knocked it back, rolled it out, added the mixed dried fruit and dark muscovado sugar which fills the centre of the coil, and then rolled the whole up. After slicing the roll up into equal parts, I popped them into a greased roasting tin (you need something with high sides), and left them to rise for another 30 minutes.

Whilst the buns were doing their thing, I made up the honey, sugar, milk and butter syrup which goes over the top of the dough prior to baking. This smells great!

So, post-baking what do we have? 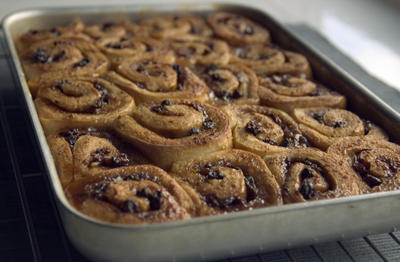 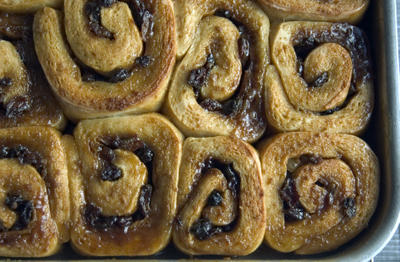 The buns all snuggled up to each other during the baking, which is the idea. The Chelsea bun should be a square shape with a circular spiral. Mine were all rather varying in size and included one large one which I assume was an Alpha Male. The buns ended up so tightly packed that I was a bit concerned about how to get them out of the tin. Linda says to take them out CAREFULLY, and divide them up when cool. I say, how do you remove a whole tray of buns in one piece?? I divided them up to get them out - no problem. 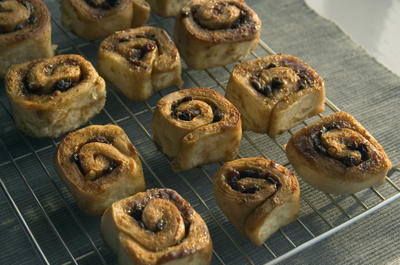 Once safely onto the cooling rack I thought that the buns looked rather nice, with the syrup gleaming in the afternoon sunlight. Couldn't wait to try one, and once they had cooled, which didn't take long, I took one (two) to eat. The dough is quite dense and rich, and could be quite heavy in a large bun, but in small one is moist and delicious. The syrup glaze turns the buns golden, as well as giving the extra sweetness that the dough needs. If I were to make them again I would add a little spice to either the dough or the dried fruit coil, as I think this would have added a nice extra touch. The buns were much nicer than those school buns I recall, and not a fly in sight. Because my buns were made small there wasn't a great deal to be made of uncoiling the buns to eat them, but I challenge you not to! 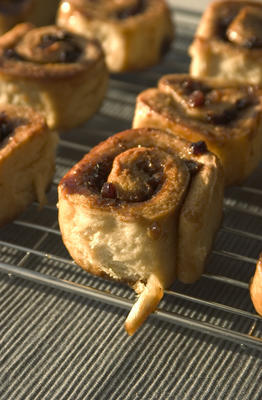 P.S. If you are a reader of Charles Dickens, check out 'Barnaby Rudge' (Chapter 42), or 'Bleak House' (Chapter 53). Both apparently contain references to the Chelsea Bun House.
Posted by AnnaW at 1:36 pm

Oh my gawd! These look amazing! Im nostalgic for the chelsea buns I had in Cambridge, where I was studying this past summer. Oh I long for those sticky sugary sweet confections! I am going to try to track down the cookbook you mentioned so I can recreate that bit of English heaven here in the States.

It's a great cookbook, with lots of other nice treats in it.
Let me know if you bake anything from it yourself.

Wow; we had a Chelsea bun-fest here last summer (January), but I was only an observer. I think I have some seriously yest issues, bc nothing I make with it rises at all! I posted about some hot cross buns that took all afternoon and ended up looking and tasting like rock cakes, leaving me very hot and cross. Good on you for having the fortitude to go out and leave the dough to rise on its own!

You know sometimes you just have to show your dough who is boss...! Yeast can be a tricky beast to work with. It is really annoying if you have spent time massaging your dough to make it feel good, only to find that the magic element in it has somehow 'died' (or become so relaxed that it is in deep sleep). However, when the yeast does do its stuff it is very gratifying to return to a tin filled with puffed up dough. Unfortunately I find it hard to predict which way things will go (this reminds me a little of the very varying fates which befall houseplants after they come to live with us, regardless of all the love or lack of attention they receive).

Did you include cinnamon - vital ingredient?

I double-checked the recipe, and it didn't include any spices at all. Quite surprising. The flavouring was all from the sugar and the fruit. Cinnamon would have been a nice extra.

How do you remove the buns from the tin?
Try using teflon-coated baking sheets, which need no greasing.
Line the tin, cook the buns, remove to work-surface.
Lift up one end of the tin (Oven-gloves!)Pull the other end of the sheet gently, and the bus will emerge on to your cooling rack.

Can I have that back, please?

I meant buns, NOT bus in the last line. AM

Hello thank you for the history. Can u tell me if you can share your receipe, when I make Chelsea buns I use currants dried cranberries, and dried cherries, just wanted some thing New. Thank you