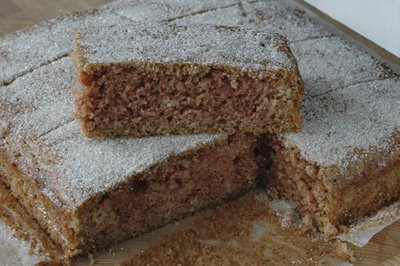 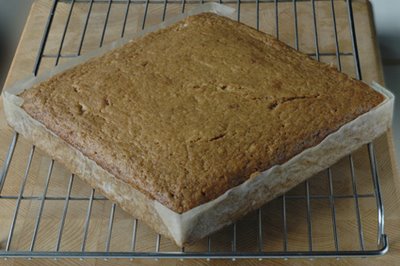 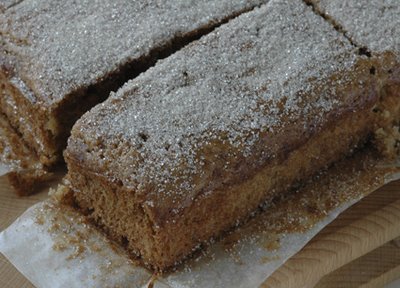 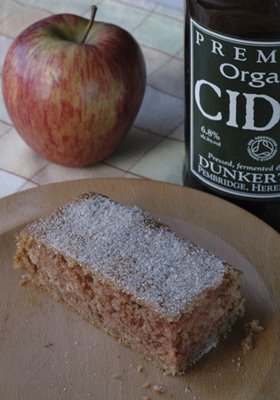 As a cyclist I have to give a plug for the Hereford Cider Route - navigable by bike (and car if you must) - read more here
Posted by AnnaW at 10:00 pm

Hi Anna, the red hue definitely comes from the reaction between the vinegar and baking soda.
I use a similar combination when making red velvet cakes.
This cake looks a perfect cutting cake with a moist, light texture.
Not always easy to find.

sorry to leave this in your comments section.

wow, the cake looks great! I love the red in it, its a beautiful tone. Having become an avid cider drinker since going to britain (you hardly see the stuff there) I'll definitely will have to try it out soon.

It sounds brilliant. I can't wait to try. Tough to get proper cider in the USA though.

Any tips on where to find great cider? This looks too good to pass up. Must make it soon!

Hi Anna!
oh, this is looking so good!
I love it! Moist & light, the cider, the cinnamon/sugar sprinkle…yum! Thanks for the recipe…

I'm a journalist writing an article on blogging for a UK magazine and I'd like to feature your marvellous blog and ask you a couple of questions. My email address is alex@splashmedia.co.uk if you'd like to contact me.

Hi Anna, you blog looks delicious to a sweet tooth like myself. And - being an Italian living in the UK - it's full of interesting facts. Do you mind if I link you to my blog?
Let me know
Simonetta

Cider and cinnmon - how can you go wrong with that combination?! And as you say, the speckling pattern makes the cake rather lovely. It looks so moist and delicous I'm quietly drooling into my coffee! Thanks for sharing.

Looks lovely - I'll have to give it a go!

I do have to take issue with the idea that only Hereford and Kent have kept up the cider-making tradition...er...what about the home of cider, Somerset??

Allie, you are so right. I can't believe I managed to overlook Somerset's continuing history of cider making. Sorry about that! I shall amend the piece. Thanks for pointing it out ; )

No problem - couldn't have my home county being left out!

I'll report back when I've had a go at the cake!

Sounds yummy but when do you use the eggs?!

This was a pleasure to make and eat. I have been cooking with cider for years but this was the first time I have baked with it. I used Checkley Brook Cider which is a Herefordshire cider, like Dunkerton's.

Our guests are going to appreciate your recipe. The cider shouldn't be a problem here.

This cake looks delicious and with cider and cinnamon together in this, you can’t go wrong, thank you for sharing this wonderful cake with us.

The name in its self " Herefordshire Cider Cake" sounds appealing, especially with the variety of ciders that are available in Herefordshire, Will give this a try, sounds delicious

you missed the egg out of the cooking instructions!

This looks like a lovely cake. It's a shame your blog seems to have been discontinued.

I would love to have this on my birthday table. Looks delicious.

A delicious cake - exceptionally light. The cider brings a distinctive and unusual aroma and flavour. I used Old Rosie cider from Weston's in Much Marcle