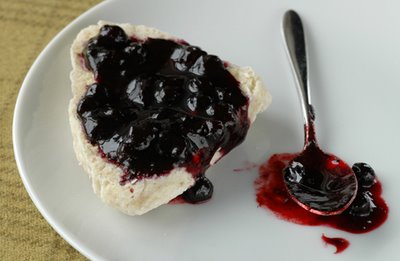 So, back to Scotland and my quest to bake the evolutionary forefathers of what we now know as the scone. For my previous posting I baked an oatmeal bannock - bannocks being the great-grandaddy of the scone. To recap: a bannock was originally a loaf of unleavened bread, circular in shape, and baked on the girdle. The name is now applied to all manner of girdle-baked doughs (sweetened, unsweetened, leavened or unleavened), and can refer to a large plate-sized scone. The original of the oatmeal bannock recipe that I used would have produced an unleavened bread. The 'modern' version of the recipe included bicarbonate of soda, although I found that the lift this gave the dough was very limited. Elizabeth David in 'English Bread and Yeast Cookery', comments that the chemical raising agents available to the home-baker from the second half of the 19th century, were first used to introduce some lightness into 'biscuits, girdle scones, oatcakes, and other bakestone products that had previously been made without an aerating agent'. The bannock I cooked was akin to a large doughy oatcake, with a pretty stodgy consistency; and so I wanted to find a recipe that would step closer to producing the type of light scone that goes down so nicely with toppings of cream and jam (particularly in the south-west of England).

I returned to F. Marian McNeill's book 'The Scots Kitchen', and selected a recipe entitled 'White Girdle Scones, or Soda Scones'. The 'white' refers to the fact that these scones are made with wheat flour, rather than oatmeal or barleymeal (these along with rye are Scotland's traditional grains); the secondary title reveals that the scones are leavened in the same way as soda bread is - with baking soda and cream of tartar. They are, naturally, cooked on a metal hot-plate, rather than oven-baked.

450g plain flour
1 tsp bicarbonate of soda
1 tsp cream of tartar
1/2 tsp salt
Buttermilk to mix to a dough (I used up a 284ml carton, and had to top up with milk)

1. Preheat your girdle (no need to grease).
2. Sieve flour, bicarbonate of soda, cream of tartar and salt into a bowl.
3. Add the buttermilk and gently mix in to form a very soft dough.
4. Divide dough into four. Take each piece and shape into a circle and then press gently with your hand to flatten to approx. 1/2inch depth (I started off with a rolling pin, but found it easier to work without it). Cut each circle into four quarters. 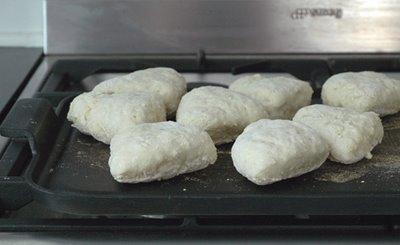 5. Pop each quarter onto the girdle. Leave to cook until the dough has swollen and risen slightly, and the base of the scone is light brown (about five minutes). Flip and cook other side. The insides should be cooked when the edges of the scone are dry (if your girdle is too hot the outsides will scorch and the inside will remind doughy - this MAY have happened to one or two of mine, but I will never admit it). 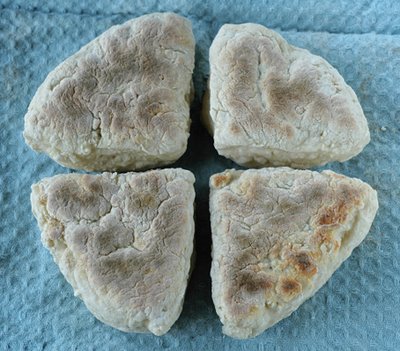 Although some of my quartered scones looked a little abstract post-girdling (if that isn't a verb, then it damn well should be), I was pleased with the general appearance of them. I was careful to not overwork the dough by handling it too much or too roughly, and the last scones on the girdle looked as well as those that hit the plate first. Hopefully this bodes well for my next round of scone baking...

What to top my girdle scones with for sampling purposes? Well, I happened to have a jar of Norwegian blueberry jam, given to me by a friend whose sister lives there. Blueberries are the cultivated form of the bilberry or blaeberry that grows wild in Scotland and the north of England. McNeil gives a recipe for blaeberry jam. It seemed an appropriate choice therefore for my scone topping (along with a lick of butter). The scones had a moist bread-like consistency, with a neutral flavour that made them an excellent back-drop to butter and jam (or even butter alone). I also found that they made a reasonable bread roll substitute to accompany our lunch-time soup. A scone for all purposes, and wrapped in a tea-towel they stayed moist all day, eating well even when cold.

This recipe pushed closer to producing the type scone served in such quantity in Devon, Cornwall, Dorset and Somerset, although the method and ingredients are sufficiently different to ensure that these girdle scones have quite different character. The similarity between these girdle scones and the West Country scones is that they cook to a light, moist dough/crumb. Those 19th century chemists can, I think, take some thanks for their role in the development of the old style unleavened bannock into such good things as these.

My next scone journey will see me descend from the hob to the oven. I am stock-piling clotted cream in anticipation. 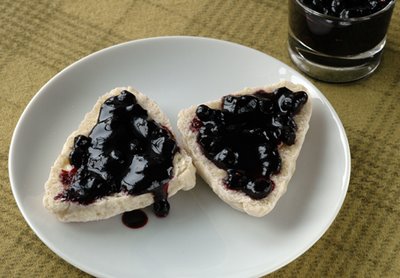 I would like to sign off this post by saying hello to all the bloggers (and a couple of partners) that I met yesterday at Johanna and Jeanne's blog party (a joint second birthday). It was great to meet everyone, and I look forward to checking out those sites that are new to me. For those not in attendance, we ate magnificently (inventive canapes, climaxing with a chocolate fountain), and drunk copious amounts of sparkling wine. I didn't take my camera because I knew that the event would be well documented (a gathering of bloggers - how could it not be so!). The weather and setting were fantastic, and Johanna and Jeanne were the perfect hostesses - helped by Carolyn, Johanna's daughter. Thank you ladies!
Posted by AnnaW at 7:27 pm

"Heat your girdle - no need to grease" - my juvenile sense of humour loves that. I have visions of 1950's housewives getting into their pre-heated ungreased waist-cinching girdles!! By th lok of these scones, I would need a girdle after a couple! I have a particular weakness for scones and they were the first things I baked as a child.

And it was great to see you on Saturday - I had a really lovely and relaxed time. What a pity you won't be making Henley this year - but there will most definitely be other events!

Scones are one of my favorite foods, to eat and to make. I've never made any on the girdle before, so I think I'll have to try these. I am so happy your posting all these different scone recipes!

( I decided to ¨tag¨ you beacuse i really like you blog! its an inspiring source to alla of us!, hope you wanna continute this little game= :) )

Go to my blog and you¨ll see what im talking about... :)
unfourtunatly I write in swedish otherwise but i write about food, just so u know :)

Well, it is hard to find a flame-resistant girdle... do you think that Nigella Lawson might know?.

My girdle/griddle was a present, but came from a cook shop in Cheltenham. It is a 'Chef's Design All-American Double Burner Griddle' Model 2675. Made by the Winconsin Aluminium Foundry Company Inc. It is coated with some magic material called 'Excaliber' which gives it really good non-stick qualities, and means you need very little fat. It is just the right width to fit across the top of my hob. It only has only face to it - a flat one. I think that you can get similar griddles which also have a ridged side for cooking on.

Thanks for all the positive comments, and Brazilian Linda I shall be popping along to your site directly.

Hi Anna,
Those girdle scones look very tasty! Scones are the best! sweet, salty or just neutral...and there are SO many recipes, nice you post so many :)
I myself am now trying on my blog to find the perfect, simple scone recipe...
Hope you'll check in!

Girdle is the Scots word for griddle, and we invited these, so even if we wanted to call it a g-string, we would be entitled to do so!

Beautifully written up and great fun. By the way, oats were not only the staple food in Scotland but also in Cumbria--where oatbread is (or was) called haverbread, from the norse word for oats--and the North of England. Most of the "traditional" foods of Scotland are in fact equally traditional in these areas too.

there are some cooking recipes which increasing in the world and there are some dishes which are popular day by day.awesome recipe....

Love all the research you did on this. Mine didn't come out anywhere near as high as yours did but they were still very good - I'll keep trying. Love all your variations too - would have never thought of using this recipe for a hot dog bun - but I am getting hungry looking at that picture.

My mother made these every week, along with pancakes. She always used a "girdle" If thick enough, scones can be split and spread with butter and jam or a slice of cheese.