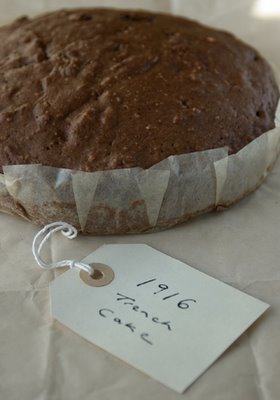 This posting is perhaps as good an example of 'baking for Britain' as you can get. The recipe is from Elizabeth Craig's book 'Economical Cookery', first published in 1948. Ms. Craig was a prolific writer of cook-books from the 1930s through to the 1960s. The necessary restrictions practiced during both World Wars meant that she was in a position to be quite an expert on economical cookery. The recipe entitled '1916 Trench Cake', is no doubt included in this volume as the enormity of both World Wars would still be fresh in the minds of most people, and of course rationing was still in place post-World War II. The cake contains no eggs, and has a modest amount of cocoa powder to add a touch of luxury (and extra calories) to a fruit cake which was destined for the boys on the front line during World War 1.

1. Preheat oven to 180C/350F/Gas 4. Grease and line your cake tin (don't use anything too large as the above quantity of ingredients makes up a fairly scant volume of mix - my tin was 18cm diameter and this was a bit too big).
2. Rub the margarine into the flour. Add the other dry ingredients and mix well.
3. Add the soda to the vinegar and milk, and then quickly add to the dry ingredients. Beat well and then turn into the tin.
4. I found my cake was baked in about an hour, but the recipe suggests up to 2 hours.

All parcels sent from home to the trenches in France must have been much appreciated for the contact they gave soldiers with loved ones, but one can imagine how much a young man must also have enjoyed a chance to vary his rations with something as modest, but otherwise unobtainable, as a slice of home-made cake. Food served to soldiers in the trenches generally consisted of bread (stale by the time it reached the front line), hard biscuits (inedible unless soaked), bully beef (similar to corned beef), tinned butter, tinned jam, tinned pork with beans (beans with a piece of pork fat on top). Soldiers may have been able to buy food locally to add to these rations. Those who could afford it had hampers sent out to them from Harrods or Fortnum & Mason(!), but such luxury was beyond the means of the average Tommy.

The army recognised the importance of postal deliveries to troop morale and packages sent from home could expect to reach soldiers in France or Belgium within two or three days, and a week to ten days reach the front line. A fruit cake, well wrapped, would travel well and stay fresh. Such was the comradeship between the men, that the contents of any parcel would be shared out. Cigarettes were handed round, new socks passed onto a man whose own had fallen to pieces, and a cake like this would have been divided up and shared. 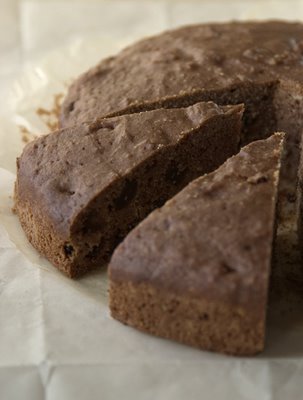 To test the keeping power of this recipe I baked the cake last Sunday, and stored in wrapped in foil within a plastic cake box. Unfortunately when I came to taste it I did find it a little dry, but this may well be the nature of the cake. The margarine rubbed into the flour didn't combine too well with the other ingredients, so the sponge was speckled with paler flecks. The small amount of cocoa powder helped the colouring, and the dash of spice lifted the flavour. However, my real reason for baking the cake was not to test the recipe, but as a modest act of remembrance. 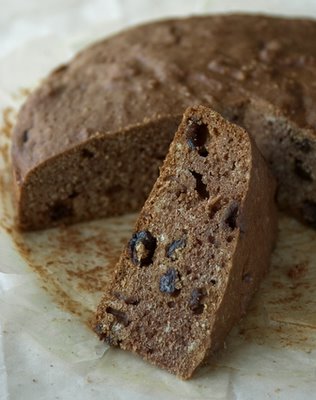 My maternal great-grandad Frederick William Smith (father to my grandma), served with the Royal Norfolk Regiment in the First World War in France and was taken prisoner. He died on 18 October 1926.

My other great-grandad on my mother's side was William Holway Pitts. He joined the Territorial Army pre-war and served in the Royal Devon Regiment. As he worked in the Post Office before the war he served behind scenes doing postal duties for the Army. He became a Sergeant.

On my father's side, great-grandad James John Graham Coggin, born 1870, served and survived without injury. When the war started he would have been 44. He was by occupation a baker and confectioner, so was in a civilian job that had to continue. At some point in the conflict he volunteered for the army, and we believe he was sent to the Dardenelles / Gallipoli region.

Herbert Sydney Salmon, my father's grandfather on his mother's side, had been in the army and served in South Africa in the Boer Wars. He was born in 1876 so would have been of a suitable age, and taking into account his military experience is likely to have served again.

I think this was a great idea! I really like to make food following very old recipes, a small link to the past...

I have always been interested in the hows and whys of what people have eaten in times gone by, whether that be 20, 50, or 200 years ago. To recreate those dishes is a way of gaining some small insight into the lives of those people - instant time travel if you like!

is it possible to make it without currants im allergic

It wasn't the tastiest cake, so I think rather than leave out the currants I would make a different recipe altogther!

What a beautiful blog and a touching entry! I've been enjoying the fascinating histories you include with each post. Do you still update this blog?

This is a great post! I don't know if you still check this blog, but I'm doing a school project on WW1 and trench food. This is great inspiration for me, and I hope to be able to put the recipe and photos you have posted to great use! Let me know if it's alright! x

To recreate those dishes is a way of gaining some small insight into the lives of those people - instant time travel if you like! God Bless you anna!

Having another go at baking this this year. As you say it's a modest way of rememberance and paying homage.

Hi Anna, I am part of the First World War partnership group helping commemorate WW1 on its 100th anniversary. We are encouraging people to bake a trench cake in much the same way you did back in 2005 - its one of a few personal acts of remembrance that people can do in their own home. Do you mind if we use your lovely image of the cake with the 1916 trench cake tag? We would of course credit you if you agree. Kind regards, Kathy

I would be very happy for you to use the image. I may have a larger image file if you need it.

Anna, that's fantastic!Thank you very much and yes a larger image would be fab if you still have it to hand. My email is Katherineloades@gmail.com

That looks yummy! I must make this for my museum teamies for our next morning tea. We had an Anzac Biscuit bake off this year... I made mine from a 1920 recipe. Very solid and very yummy! https://flic.kr/p/ngPGhx
The recipe is here
http://preshist.wordpress.com/2012/11/02/a-fund-raising-experiment-recipe-for-success/

The information you have posted is very useful. The sites you have referred was good. Thanks for sharing... cake bakery scottsdale

Ultimately applying numerous layers of powder coating can be succeeded as long as you follow a good process. By recognizing suitable setups for your powder finish gun, stove cure times, and product grounding you can be certain to attain excellent results using numerous coats of powder coating. Best part washer