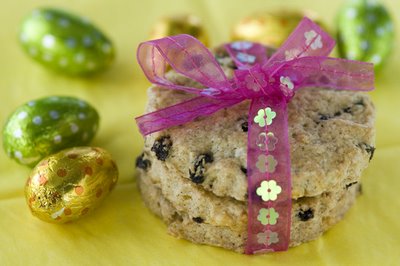 Easter biscuits are made across Britain and are so ubiquitous that Marks & Spencer sell them as part of their seasonal fare (see below). Traditionally they are served after church on Easter Sunday, and are presented in a bundle of three biscuits to represent the Holy Trinity. They are eaten alongside hot cross buns, simnel cake and copious quantities of chocolate eggs as part of our Easter festivities. The feasting comes at the end of Lent, so the taste of rich foods is supposed to come as a treat. Similar biscuits eaten before Lent commences are known as Lenten biscuits, and are made to use up eggs, sugar etc. in the way that the Shrove Tuesday pancake does.

The West Country (from Gloucestershire, Avon, Wiltshire and Dorset westwards) has an association with Easter biscuit recipes, but my reading turned up more country-wide variations than there are days in Lent, so I think that this is one of those recipes with a central 'theme', but for which there are unlimited variations. The theme is spice and fruit. All Easter biscuits are spiced, either through a small addition of mixed spice or ground cinnamon. The fruit is either solely currants, or can be currants with a little mixed peel. Some recipes use grated lemon zest for extra zing. Biscuits made commercially may have oil of cassia added. Cassia is a part of the same (laurel) family as the cinnamon that you can pick up in the supermarket. It has a similar but stronger and more bitter flavour. An Bristol educated, Australian resident writes of making Easter biscuits at catering college in Bristol, that had oil of cassia as a flavouring. A quick scout around the net reveals it to be an ingredient you can pick up through retailers that stock essential oils etc. (should you wish to try it). I also found one commercial bakery that uses it as a flavouring, and proclaims the fact.

My recipe is from 'Good Things in England', edited by Florence White. This book first published in 1932 was in Florence's words, '...an attempt to capture the charm of England's cookery before it is completely crushed out of existence.' The book documents in recipe form traditional and regional dishes from all corners of the country. A similar study was made of Scottish food by F. Marian NcNeill in 1929 (I have yet to learn of a similar text covering Welsh food).

The post-war years encouraged a certain amount of introspection and a re-evaluation of English culture, but were also a forward looking age, and a generation that saw foreign culture as something to be experimented with and explored. Florence White did not seek to exclude the modern, but wished to record the riches of England's larder, and to talk with the people who were still preparing dishes with ancient credentials, and to ensure that such recipes were documented for future generations (such as ours - Florence, this posting is for you). The flypiece to the book reads, 'A Practical Cookery Book for Everyday Use. Containing Traditional and Regional Recipes suited to Modern Tastes contributed by English Men and Women between 1399 and 1932.'

Florence White set up the English Folk Association in 1931, and in the January of that year was held the first English Folk Cookery Exhibition in Kensington, London. My recipe for Easter biscuits was supplied for this exhibition by Mrs. Wyatt of Huish Episcopi, Somerset. Sedgemoor is a coastal region of Somerset, firmly in the 'West Country'.

1. Preheat oven to 180C/350F/Gas 4. Prepare two baking sheets.
2. Rub the butter into the flour.
3. Add the sugar, currants, spice and the cinnamon.
4. Beat the egg and mix with the brandy - add to the dry ingredients ands stir until well incorporated.
5. Roll out about 1/2 inch/1cm thick, and cut into rounds.
6. Bake for about 20 minutes until golden brown.

There was no instruction to glaze with egg white and sprinkle with sugar, which most other recipes suggested. I thought that by doing so the finished biscuits might have looked a bit more appetising. They tasted rather fine, but the surface of them was very matt and had large dimples. However, on a closer examination of Marks & Spencer's efforts, I saw that their biscuits were identical in colour, also had large dimples, and although were speckled with sugar grains were equally matt. A taste test (tough job, but someone needs to address these things) revealed a bisuit with a drier consistency than mine, and more snap. The main flavour to my taste buds appeared to be aniseed with a hint of caramel. All in all they were no better, no worse, simply different (oh, alright then. My biscuits beat M&S's by a Easter bunny's whisker, but don't tell them). 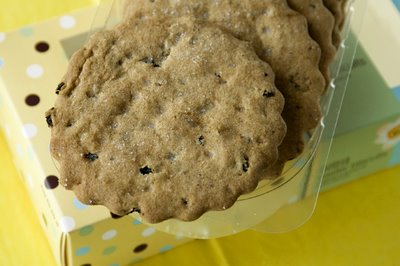 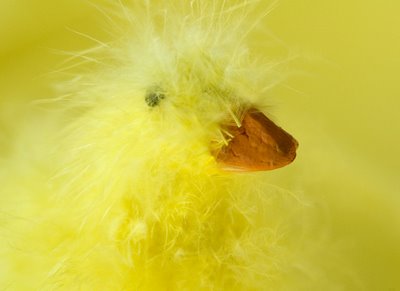 Easter chick. Who are you calling ugly?
Posted by AnnaW at 11:42 am

Hi Anne,
another great post...I love the bits of trivia and history, it really adds a nice touch. I'm preparing easter brunch next week and will definetly make some of these...happy easter
Eva

I wonder if the Cassia is a Bristol thing. My mother was taught to make the biscuits by her mother and she was told that the "must" ingredient was cassia. As mum is 83 this would take things back to at least the date of your cookery book. Nan was a sempstress and did not I think have any connection to commercial baking

Thanks for the information Jane. I wonder if anyone else knows whether the cassia was a flavour particular to Bristol? Perhaps the spice was available locally because of the port/or perhaps a industry used it on a large-scale and locals developed a taste for it?

I was born in 1925 in Bishopsworth which at the time was a village just outside Bristol(became part of the city in about 1938). My Grandmother, who died in 1939 at the age of 78, my mother and her sisters always put Oil of cassia in their Easter B. When I married in 1949 my mother gave me a tiny bottle of it and when after a number of years it was finished I could not find a chemist who knew it. I finally found some in Culpeppers in Bath in the 80's. It was marked"Not to be taken internally".However as my family had survived though using it I continued to use it but Culpeppers no longer keep it. I now live in Ireland and this week received some from a place in Ireland which lists an A to Z on herbal oils. The bottle still has a warning saying thet it is not to be taken internally nor to be used on the skin. The only person I know who also used it in her biscuits is another Bristolian.

Thanks for the extra insight, Anon.! I think I shall have to track down some cassia oil and bake a sample batch of Easter biscuits using it. Does anyone know why the oil is now marked not for internal consumption/use on skin?

I come from Bristol but have lived in New Zealand for 54 years!
When I wanted to get the right flavour for Easter biscuits my mother asked Caroline's cake shop in Westbury on Trym and they told her it was oil of cassia. I was able to get some from the pharmacist but unfortunayely it is not now available though I don't know why.
Thank you for the information and I must try and get some for next year. Happy Easter!!
Anne

If anyone still wants oil of cassia, my husband just got some today, he had to order it from a specialist food supplier. The bottle he brought home has an address and phone number on it as follows: Topfit health Products
28 Dial Hill road
Cleavedon
BS21 7HL (England)
Tel 01275 340042

Thanks for the information Tracey. Interestingly, the company that your oil comes from is based just west of Bristol - it has a Bristol postcode - so it still is produced in the locality.

I too am a bristol native and have always used cassia oil in my easter biscuits! my mum does too and she was also born and bred in the bristol area!!
how strange!!

Mmmmmmm, these Sedgemoor Cakes look delicious. I just got back from a buy silver fair near chipping campden in the cotswolds, these cakes would have gine down nicely with a cup of darjeeling tea.

very interesting blog! check this site's out it might help you a lot.
keyword research, choosing the right keywords,
affiliate marketing keywords

another great post...I love the bits of trivia and history, it really adds a nice touch. I'm preparing easter brunch next week and will definetly make some of these...happy easter

early in the morning come across your blog..... so with watered mouth i wanna look to eat something.

We had these biscuits after church on Easter morning (in Australia)! The woman who made them said they were an English recipe, but I had no idea they were a tradition!

i was failed download the files,..can you show me the mirror Tempe Penyet - Mbak Desi


Medisoft software for all your medical software needs.

I'm from north somerset. It is impossible to get the authentic taste without oil of cassia, just a couple of drops. Now living in west Wales I had a bit of a hunt to find some, to take to my daughter in Louisiana.

Just came across your post. I was searching for an Easter Biscuit recipe that I can cook in a convection microwave because my oven has died on me and no hope of getting a new one before Easter now.
I actually live in Huish Episcopi! Although I have lived in the area nearly all my life, I've never heard of Sedgemoor Cakes but I'll definitely try cooking these. They sound delicious

Whenever we praise someone, we give him a number, like if I appreciate your post from one to 10, I would like to give you the full number of 10 because you wrote your post very well. The word is very beautiful. I hope you will keep writing such excellent posts in your life and we will definitely comment by reading these posts.
Phase 4 Call Girls
call girls in golf course road
escorts girls in sector 2 gurugram
Call Girls in Sector 49
Call Girls In Sector 48
escort girls in sector 1
important to use mask
good friend
escort service in gurugram
Friendships