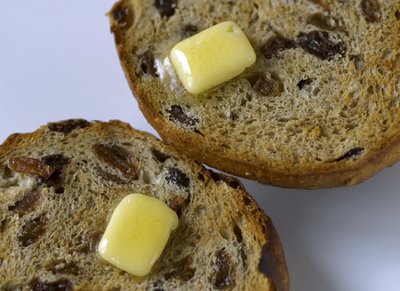 'Happiness is a warm bun', as I believe John Lennon might have once said. He might also have written, 'make loaves not war'. So I think that he and I would be in agreement over the pleasures of a hot cross bun. In fact you would have to be something of a puritanal killjoy to issue a statement of 'ban the bun' (and bun puns), but this is what Oliver Cromwell did after he took power. One minute he was chopping off the head of a monarch, and the next vetoeing the simple pleasure of a sweet fruit bun. Sometimes that man just went too far.

Fortunately now normal service has been resumed, and I feel it is pretty likely that many of you will be enjoying a bun or two over the Easter weekend. As you eat and savour, please consider the ancient history and the mysterious powers said to be embued in your average humble hot cross bun.

The most obvious association that the hot cross bun has is with the Christian church, and the story of the crucifixtion of Jesus Christ. The cross on top of the bun is seen to represent the crucifix, but is also a celebration of the resurrection. However, the hot cross bun also has links with much older religions. Ancient Greek and Egyptian bakers cooked up buns at a similar time of year to celebrate the coming of Spring. Anglo-Saxon Pagans worshipped a goddess by the name of Eostre, who was their Goddess of Spring (if you type Eostre into Google, you will find one sponsored link - to Cadburys and their Easter eggs. Someone at the chocolate factory is obviously seeking to appeal to the intellectual and New Age Pagan consumer). The Saxons in their worship of Eostre would consume a round bun (symbolic of the moon), that was marked into four quarters (either representative of the phases of the moon, or symbolic of the sun). It was the Pagan celebration of Eostre that gave its name to the Christian festival, as with a sleight of hand one became the other.

Legend has it that it was a monk at St. Albans abbey who converted the cross topped bun to the Christian church. In 1361 Father Thomas Rocliffe baked spiced fruit buns, marked them with a cross and distributed them to the poor. Some sources claim the dough used was also used for the communion wafer, and as it had been consecrated this was why the buns bore the mark of the cross. It was the presumed sanctity of the dough that may have given rise to another bun tale, namely that buns baked on Good Friday (the Friday before Easter Sunday) would not grow stale nor become mouldy. It also may account for the fact that hot cross buns were thought to be capable of curing certain illnesses; that sailors took them to sea to protect against shipwreck; and that farmers believed they could keep the rats from their grain (acting as a distraction device I can see how this one might work).

I baked my hot cross buns to Dan Lepard's recipe from March issue of Waitrose Food Illustrated. The results tasted worthy of a Beatles' lyric, but I did have a little trouble in the making of them. Any advice gratefully received.

The thing about any home bread-making is that at first glance a recipe may look like a lot of time-consuming faff; but if you tot up the total time spent in the kitchen, it only actually involves about half an hour's work. OK, the rising part of the process may take 15 hours, but you are unlikely to spend that time sitting watching the bowl. Go out and enjoy life.

I started by weighing out and assembling the ingredients during commercial breaks the night before baking. I then went to bed for a night dreaming of warm buns(!). In the morning I got up and went to the hairdresser, and then came back and examined my dough. I had left the dough for a slow rise in the fridge, and although it had definitely changed in appearance from when I had popped it in 10 hours previous, it looked nothing like any previous bread dough I had made. The dough had been very wet and although the moisture had been absorbed, the rise was rather limited. I followed Dan Lepard's method of dividing the dough, and then repeatedly folding each piece (rather than kneading). The dough was very cold, and it felt quite solid and heavy rather than elastic. Perhaps the dough should have been left to come to room temperature?

I then left my dough buns to rise again. Off I popped to the shops to buy the ingredients for lunch (chicken and lime soup). When I came back I had another moment of worry as the buns hadn't got any larger. I put the trays next to the hob as I prepared the soup and this did seem to perk the buns up a bit. On went the flour and water paste cross (quite difficult to get the consistency right), and then into the oven. 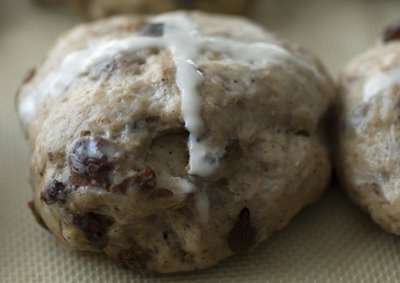 I thought that the initial stage of baking might encourage a final swelling, but nope. Still, the smells coming from the oven were suitably spicey and hunger inducing. When the buns were done I glazed them - which really does finish the appearance of them off very nicely, although my crosses were a little difficult to make out. 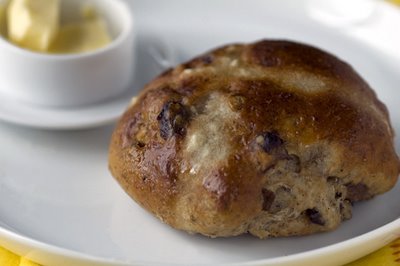 The finished buns were dense but the consistency was perfectly OK. See top picture for a cross-section. I toasted a bun and topped each half with some beautiful Cornish butter - the flavour of the buns was superb. Happy Easter and welcome Spring! 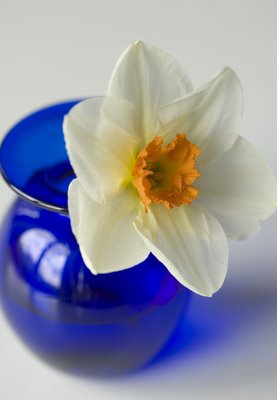 One last story - In the East End of London there is a pub called The Widow's Son. In a cottage that stood where the pub is today, lived a widow whose son was a sailor. The son was due to return home from sea one Easter Friday, and his mother had set about baking his favourite treat - hot cross buns. Sadly her son's boat never returned to safe harbour, and the hot cross buns lay uneaten. Each year on Easter Friday his mother would bake another batch of buns, and would set one aside for her boy. The cottage became known as 'The Bun House',and when it was in 1848 demolished and a pub built in its place, the widow's tale lived on in the pub's name. Each year on Good Friday there is a ceremony within the pub, and a sailor will add another bun to a net of them hanging from the pub's beamed ceiling, before raising a glass or two to the Widow's son.
Posted by AnnaW at 5:13 pm

I am awestruck. I love each and every post! Each post is beautifully written with such amazing historical information, and your baking is always exceptionally inspiring. I can almost smell the buns!!! Yum!

There is another theory about the crosses. In the 17th century spiced buns were slashed in the shape of the cross on Good Friday to release the devil within! Happily it also let the butter ooze in.

Hi Anna,
happy easter, and another great post and I love the bit of history with the recipes. I also made hot cross buns but had the same problem as you, even though the recipe was different and I did all my rising at room temperature...oh well, better luck next year :-)

Hi,
I’d like to seek your help in my dissertation research and would really appreciate it if would agree to this. It only involves either an online interview or filling in a survey.

If you could give me your email address (either by replying to this comment or emailing me at amoebamoron@gmail.com), we can liaise from there. Thank you very much!

I make my hot cross buns using Dan Lepard's recipe in Baking with Passion and they always work out brilliantly. The folding etc is a lot of faff & I'm not convinced (I once went to a day's breadmaking course with Dan & this is his pet thing) because old-fashioned kneading works best with this recipe. And the one in the book is a lot faster - you can start after breakfast and be eating the buns for lunch.

I will have to give the hot cross buns another go. Jane, I like the sound of the recipe that is done and dusted between breakfast and lunch. I guess that would leave time to make a second batch in the afternoon, should you have eaten the first lot for lunch (it could happen). I will search out Mr. Lepard's book.

hallo, i'm doing some research for the Guardian newspaper about good places to buy good (especially organic food around the UK, and was wondering if you had some insider information. Your blog is really beautiful (the photos are just wonderful), and you obviously know exactly what you're talking about. Any information, emailed either directly to me at bibizee@yahoo.co.uk, or posted on the Guardian Unlimited site at http://blogs.guardian.co.uk/news/archives/2006/04/27/good_food_share_your_tips.html would be really welcome,
bibi

what a boring site. we need to sell our cooking to the rest of the world. Very long winded and a poorly planned site.

I think your blog is great, I read aout it in the Times today and am really impressed. Are you familiar with Mermaid Cookware, I think you would love their quality products. There great for keen bakers!

Thanks for taking the trouble to come and visit the site. Didn't Delia Smith recommend Mermaid products at one point, and caused a shopping frenzy? I don't think I have any of them. I am quite fond of the Silverwood range - but am always open to new shopping opportunities!

Glad you enjoyed the site!

I love scones and am so haapy to have a new receipe and I love your site thank you so much cookielady from Oregon, USA

I think your blog is great, I read aout it in the Times today and am really impressed.

We just had Easter again - I love a hot cross bun!

So good topic really i like any post talking about Ancient Egypt but i want to say thing to u Ancient Egypt not that only ... you can see in Ancient Egypt Ancient Egyptian Gods and more , you shall search in Google and Wikipedia about that .... thanks a gain ,,,

Thank you for your post. This is excellent information. It is amazing and wonderful to visit your site.
food safety alerts
safety food alarms

Whenever we praise someone, we give him a number, like if I appreciate your post from one to 10, I would like to give you the full number of 10 because you wrote your post very well. The word is very beautiful. I hope you will keep writing such excellent posts in your life and we will definitely comment by reading these posts.
Phase 4 Call Girls
call girls in golf course road
escorts girls in sector 2 gurugram
Call Girls in Sector 49
Call Girls In Sector 48
escort girls in sector 1
important to use mask
good friend
escort service in gurugram
Friendships