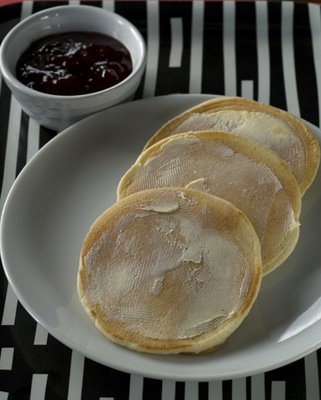 Scotch pancakes are one of many Scottish cakes cooked on a flat bakestone or girdle (griddle to the English). The Scottish poet Robert Burns described his native land as a 'Land o' Cakes'. He may have meant the oatcake in particular, but 'cake' also meant more generally any form of bread (leavened or unleavened), or cereal-based baked foodstuff. A pancake was a 'cake' cooked on a heated flat-surface; historically a bakestone, hearthstone or girdle, and eventually a pan. Scotch pancakes are also known as 'drop' or 'dropped scones', because soft dollops of mixture are dropped onto the cooking surface. According to Laura Mason, the Scottish are the originators of the scone (a subset of the cake genus), and the 'Scotch pancake' is one of its many forms. I look forward to exploring other members of the Scottish scone family shortly...

The method of cooking on a heated surface is a very ancient one. If you only have a wood or peat fuelled fire for your cooking, it is a simple matter to bury a stone in the embers, or to prop a metal pan over the flames in order to heat the cooking surface. The Welsh have similar girdle-cooked foods of long heritage - such as crempogs (ffroes) and Welsh cakes (The Oxford Companion to Food mentions a theory that the Scottish miners who travelled south to work in the Welsh coal districts of Glamorganshire, were responsible for bringing the girdle pancake recipe with them.). Northern England shared the oatcake with the Scottish Highlands, as both areas were well suited to the cultivation of oats, although different regions prepared the oatcakes in slightly different way.

The 'girdle' used by the Scots for their cooking, is a round, cast-iron flat plate, with a semi-circular handle. The town of Culross in Fife, was granted a royal charter for their manufacture back in 1599 - this gave Culross a monopoly on the production of girdles for many years. The National Trust for Scotland has been working to preserve the town of Culross since the 1930s, so by the 20th century the success of Culross girdles had diminished somewhat. I have not been to the town, but it looks a handsome place.

Scotch Pancakes (recipe from this book)

1. First grease your girdle (I love that instruction) - use a oil as butter will burn, and then put on the hob to heat.
2. Sift the flour into a bowl and add the pinch of salt, and then tip in the sugar.
3. Crack the egg into the milk (best not to try doing this into the bottle), and whisk.
4. Pour the egg and milk liquid into the dry ingredients, and mix to form a smooth batter.
5. Test that the girdle is hot enough by putting a teaspoonsworth of batter onto it. You should have a fairy-size pancake cooked for you in less than a minute.
6. For the main-event pancakes, use a tablespoon to drop the batter onto the girdle. I used the back of the spoon to form the dollops into more aesthetic rounds.
7. Keep a beady eye on the batter. When the surface has become covered in bubbles get ready to flip them over using a palette knife (please ignore the scratchy metal one I am using). 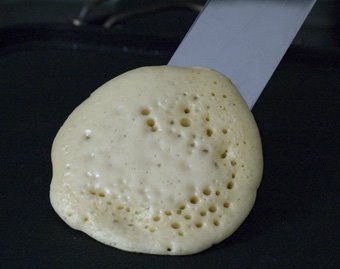 Don't worry if the underside isn't as coloured as you would like it to be, you can always turn the pancake over for an extra girdling. 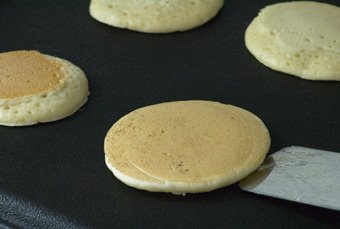 8. When cooked remove the pancakes from the girdle, and wrap in clean tea towel to keep moist.

The jury is out on whether to eat these hot from the girdle, or leave them to cool. Either way I think that they should be eaten on the day of cooking. This recipe makes about 18 pancakes, so a good quantity for Sunday night tea for two. Consume with butter, or butter and jam. 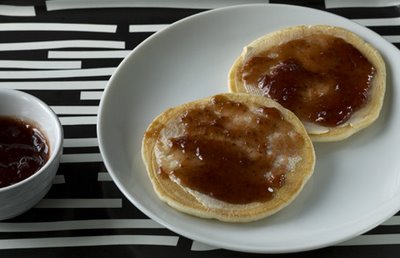 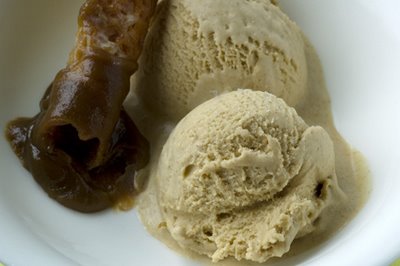 I love icecream. I love trying new flavours. One the highlights of our trip last year to Japan was the opportunity to try matcha (green tea), sweet potato, black sesame seed, and sake icecreams. The first icecream of summer is an event of great ceremonial celebration; and if it occurs on an unseasonably glorious day in March, then so much the better. And, isn’t just amazing how at the end of a large meal, a scoop or two of icecream still manages to slither down the hatch…

Inspired by a fabulous idea dreamt up by Rob at Hungry in Hogtown for entry in the recent St. George’s day English pudding event, I just had to make a batch of sticky toffee pudding icecream to try for myself.

Sticky toffee pudding, as Rob discovered, is not a English pudding of great antiquity, but it is a dessert that is well known across the country, and one that features on the menus of eateries from homely hostelries to hoity-toity hotels. I think it deserves the accolade of 'modern classic', and is undoubtably a recipe that will have great longevity. It has an association with the Lake District, as the recipe apparently originated from the kitchens of The Sharrow Bay Hotel, that stands on the shores of Lake Ullswater, Penrith, Cumbria. The hotel was established in 1948 by the late Francis Coulson and Brian Sack. Francis was by all accounts a bit of a genius in the kitchen. He devised the recipe (originally called 'icky-sticky toffee sponge) back in the early 1970s. He was never precious about the recipe, and passed it on to whoever asked for it. However, there does appear to be a rival claim for the pudding from another Cumbrian hotel; the chef of which set up Cartmel Village Shop, in the small town of Cartmel to produce and sell the puddings commercially. If you live in the UK, then you will probably have seen Cartmel Sticky Toffee Puddings in your local supermarket. They are very good indeed. 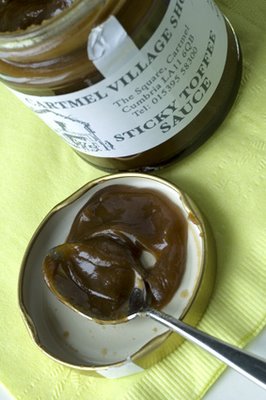 On a cruise around Waitrose I discovered that Cartmel Village Shop also produce a Sticky Toffee Sauce. Made with only sugar, cream, butter and vanilla essence, it tastes as naughty as you might expect. Keep it out of sight, to try and keep it out of mind.

For the purposes of this recipe I bought two Marks and Spencer Sticky Toffee Puddings, as it would have been too distressing to mulch up a Cartmel pudding, and too much effort to make my own simply to use as an icecream base. The M&S puddings come in packs of two individual servings, and the quantity was pretty spot on for Rob's recipe. 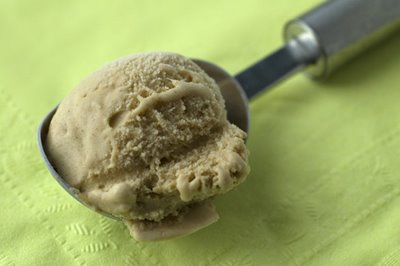 A couple of notes on the making of the icecream - I took the instruction to caramelise the pudding to mean simply heating the broken pudding in its own sugary sauce. I did this over a pretty low heat for about 5-8 minutes. I added the sugar with the milk and cream (think Rob forgot to mention this). The resulting icecream had a intense flavour, but I think (for my tastes) could have benefited from a reduction in the amount of molasses used. The treacley taste was a little overwhelming. However, that aside this was a luxuriant creamy take on an already top-tip pudding.

To set off the smoothly dense icecream I decided make some brandy snaps. Brandy snaps are a form of thin, crunchy, sticky and slightly chewy ginger biscuit, made and consumed across the country. Historically they have come in differing forms, but now they are generally rolled into a tube shape when still warm. The cooled tube can then be filled with cream to serve.

Laura Mason and Dorothy Hartley both classify brandy snaps as wafers - which are thin biscuits made in a wafering iron, with heat applied to top and bottom surfaces of the biscuit. (Click here to see some historical wafers). Mason suggests that wafers (as sweet biscuits) developed from the plain wafers produced in Catholic countries for use celebrating the Eucharist. Now, it seems to me that there is quite a long journey to be made from Communion wafer to brandy snap, so I'll take Ms. Mason's word for this. Alan Davidson in the 'Oxford Companion to Food' describes the biscuits as, 'crisp, lacy baked items which stand on the frontier between biscuits, wafers and sugar confectionery.' 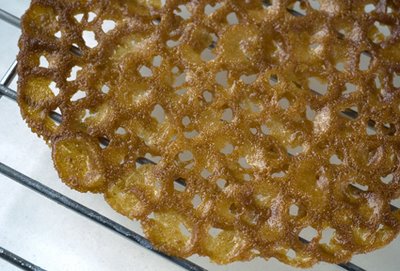 To me this sounds a better summation of what brandy snaps are; I can find no recipe that requires wafer tongs to cook them, instead they are oven baked on a metal sheet. I think that they could be successfully made on a flat griddle, which is perhaps closer to the cooking method used for wafers.

Brandy snaps were sold in Britain as another form of fairing (gingered biscuits were a big winner at country fairs it seems), and they came in many shapes and could be made with sugar, honey or treacle, and from the 1880s - golden syrup. Not all recipes include brandy - it seems that the flavour is not really discernable, so to make cheaper batches of snaps it was left out. Some recipes skip out the ginger too, relying solely on the cooked sugar and butter for flavouring. Don't worry, there will be none of that abstinence in this household. The recipe I followed from Jane Grigson's 'English Food' uses both brandy and ginger, and golden syrup lends its deliciously sticky presence to form the basis of the snap.

1. Preheat oven to 200C/400F/Gas 6. Prepare a couple of baking sheets with greaseproof paper.
2. Melt the butter, syrup and sugar in a pan over a low heat. Keep stirring, and once the sugar has dissolved take pan off the heat. Leave the mixture to cool.
3. As soon as the mixture is tepid, add the salt, flour, ginger, lemon and brandy. Mix well.
4. Measure out the mixture using teaspoons. You will need to space the dollops out well, so aim for 6 per baking sheet (you can always do a second batch - I did).
5. Jane suggests baking for 8-10 minutes, but I found this too long and the snaps burnt. By my third go I snatched the baking sheet from the oven immediately as a nice deep golden had been achieved.
6. You can shape the snaps round wooden spoon handles, or a rolling pin, and drape them over the base of a glass to form a basket. Be ready to start shaping not long after the biscuits come out of the oven. They might appear too soft, but as soon as you start to work them the mixture seems to magically harden. Hours of fun. 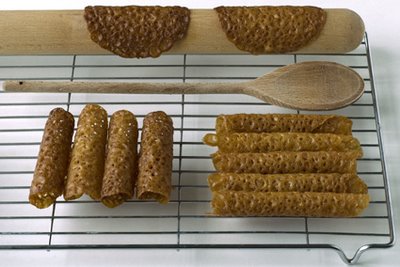 The brandy snaps went well with the sticky toffee icecream, but I had another batch of icecream in the freezer, also freshly churned this weekend -rhubarb ripple icecream (from an old recipe from Sainsbury's Magazine). I felt a bit mean excluding it from the chance of a moment of glory, so I popped a couple of scoops into the only brandy snap basket that I had managed to make, and stuck in a fan of broken snap. 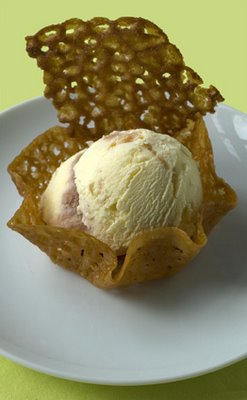 Who needs crockery? I think that there could be a large market for edible tableware...
Posted by AnnaW at 7:21 pm 21 comments: