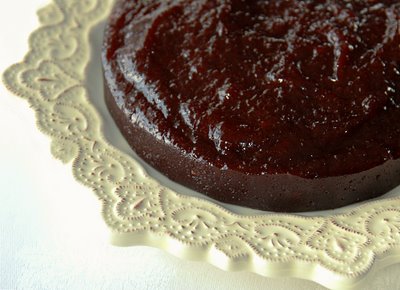 Tangy with bitter-sweet orange; an amber jelly thick with petrified peel; beloved of good folks such as Paddington Bear (of COURSE he's a real person) and the cream of England's great explorers (Hillary took a jar to aid him in his climb of Everest, and Scott took a pot on his fateful trip to the South Pole). Marmalade is a dish that may be produced in kitchens all over Britain, although commercial production is associated with Oxford and Scotland. The fruit of popular choice is Seville orange, and seasonality dictates that home-made marmalade can only be produced during the first couple of months of the year. I had good intentions to make a batch at the end of this winter, but in the blink of an eye the Seville oranges that had come into the supermarkets all vanished. Rather than miss out altogether on my first foray into marmalade making, I decided instead to look into the history of the preserve. I soon discovered that the marmalade that was first produced in this country was quite different to that which graces today's breakfast table. I need to credit here 'The Book of Marmalade' by C. Anne Wilson, from which most of my factual information derives.

The fruit conserve that was to become known as marmalade first arrived on these shores in the 15th century courtesy of the Portuguese. Luxury foods such as sugars, dried fruits and sweet wines were all assured good sellers to the wealthier Tudor households, and it seems reasonable to think that some canny Portuguese trader thought it worthwhile to also bring over a few boxes of their local sweet marmelada, made of preserved marmelo (Portuguese for quince). Although Britain already had recipes (via the Romans) for preserving quinces in honey, these gave a wetter or more jellied result.

Marmelada was a preserve made of quince and sugar, set to a thick, jellied paste and contained in a wooden box rather than an earthenware pot. It was cut and served in slices. Marmelada still exists and is widely available in Portugal, and in Spain too where it goes under the name Membrillo.

The origins of marmelada reach away from the shores of the Iberian penisula, and toward ancient Persia. The Persians were the first people to make use of sugar as a foodstuff, and to use sugar to help preserve fruits for later consumption (the Romans and Greeks used honey as a sweetener, keeping sugar for medicinal purposes). With the expansion of the Persian Empire, and then the later conquest of Portugal and Spain by the Moors of North Africa, the early Persian method of preserving quinces using sugar was introduced to Western Europe.

C. Anne Wilson considers it likely that Portuguese marmelada was additionally flavoured with rosewater (betraying its Persian origins). It was the novelty of this flavouring that distinguished it from the quince preserves and jellies already available in Britain, and contributed to it becoming a must-eat foodstuff in Tudor England.

Tudor housewives taught themselves to make marmelada/marmalade at home, and the name became applied to the method of preserving fruit, and not just to one type of fruit. 16th century recipe books record cooking instructions for apple, pear and strawberry marmalades. Quinces were popular because they are naturally high in pectin, which means the fruit helps the marmalade to set readily.

I decided to try my hand at this earliest form of marmalade, working from a recipe transcribed by Hilary Spurling from 'Elinor Fettiplace's Receipt Book', which dates from the first few years of the 17th century. Lady Elinor's recipe book found its way down the family tree to Hilary. She has tested each of the recipes, and in her book gives both the original wording and her modern interpretation (book first published by Penguin in 1986). I bought the book in a charity shop and it is a real treasured find.

Lady Elinor's recipe gives instructions for either white or red quince marmalade. White marmalade is made by only cooking the quinces for a short time, boiling them fast so that the quinces don't darken to a deep red. I decided to go for the darker ruby red marmalade, although achieve this you do need to have a lot of time of your hands (7 -8 hours). If you really want to impress, make both, cut up and box checkerboard fashion.

I used two quinces, caster sugar, and water. Simple. Read below for quantities.
I boxed my marmalade into a wooden Turkish Delight box, having first consumed all the contents with indecent haste. I lined the box base and sides with greaseproof paper to preventing the marmalade from sticking to the wood.

1. Stew the whole quinces using just enough water to cover them. This will take about an hour. They are ready when the skin tears readily when prodded with a spoon handle. Remove the fruit from the water, but don't discard.
2. Let the fruit cool a little, and when you can manage it, peel, core and slice them. Now weigh them and weigh out an equal amount of sugar.
3. Return the sliced fruit to the pan of water used to stew them, and add the sugar.
4. Put the pan over a very low heat, cover, and leave for six to seven hours for the water to reduce and the quinces to darken deliciously. 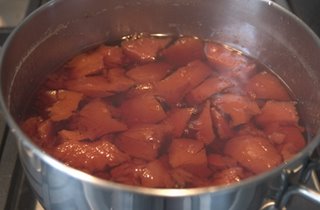 After two and a half hours my quinces had taken on a more rosey hue. 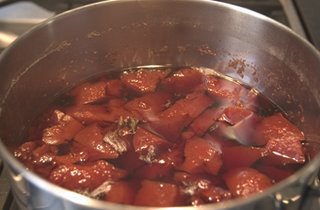 An hour and a half later, the sugared water is reducing, but the quinces haven't darkened noticeably.

After six hours the quinces have turned a luscious plum port colour. 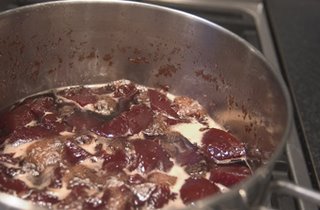 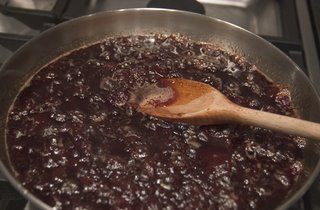 At this final stage you need to be ready to get your quince paste sieved and into the waiting box pretty speedily. I sieved mine into a bowl, and as soon as the fruit hit the cold surface it began to set. Perhaps warming the bowl first would help? Once sieved transfer into your marmalade box and admire the beauty of its red-black gleaming density. 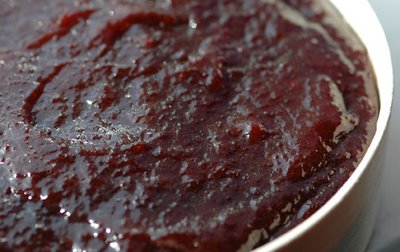 This marmalade is much darker and heavier in consistency than Portuguese marmelada and Spanish membrillo. The flavour is pretty much the same but the sensation in the mouth is quite different. It cuts easily into slices, and has a robust graininess. I dusted my marmalade with sugar prior to slicing. When the preserve was produced in 16th and 17th century Britain, it was served in delicate slices at the end of a meal, as part of the dessert course. What a fine ending to a dinner. 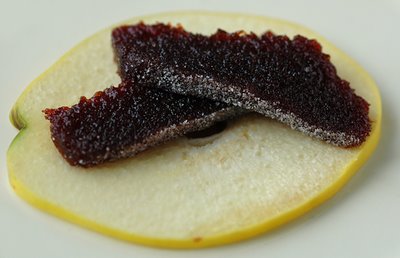 Not a serving suggestion - raw quince is not recommended! But what an amazing transformation of colour.

More marmalade history to follow...
Posted by AnnaW at 8:02 pm

Unknown said...
This comment has been removed by a blog administrator.
10:48 am

I just love your blog. It's a real change to see someone rooting for British food.

Have written about you on my blog today.

I love your blog. You are such an inspiration!!! I will definitely be mentioning your blog on mine soon! I would also like to add you as a link, if that's o.k.

Lauren loves the brandy snaps - just like her Granny used to make in Taplow!

It is nice to see such a quality site - there is a lot more on the history of quince marmalade and its relatives on this site, which has much on English food from the past -

I am very flattered by your comment. I have a link to the Historic Food site on my blog front page. Your site is fantastic, and the recreations of historic foods/elaborate desserts are simply wonderful. I have been very inspired by your work, and would love to attend one of your historic food courses - so maybe we shall meet one day!

So beautiful! great the color of your marmalade